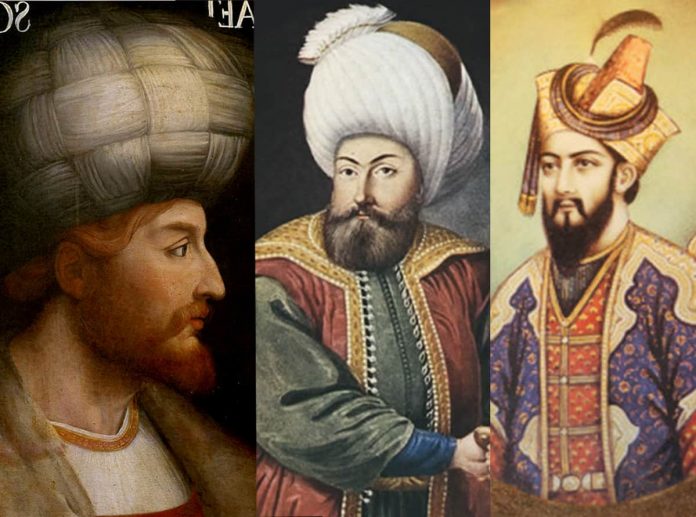 An interesting connection of the medieval times was the shared past between the Ottoman, Safavid and Mughal empires spread across a vast expanse of the world, stretching from the Himalayas to the Indian Ocean to the Mediterranean Sea. The diverse literate communities with overlapping existence in these three empires left a lasting legacy on the political, religious, cultural and commercial landscape of the Near East and India.

The intertwining themes of these communities provide a historical context to understand how elements from these cultures were mutually transmitted to develop new models of governance in the regions where they were transported. This not only makes the study of the regions’ interconnected past interesting, but it also explores aspects of diplomacy, state formation, history writing, religious debate, and political thought.

The great Islamic empires of the Ottomans, Safavids and Mughals shared a remarkable degree of cultural and institutional continuity. Persian was the language of courtiers, and Arabic served as a language of Islamic scholarship. Thus, scholars and courtiers shared a medium of communication, as well as a corpus of classical texts that shaped their intellectual, social and cultural norms. Courts across these regions were familiar territory for a large number of scholars, poets, courtiers, and bureaucrats seeking opportunities for employment.

In its heydays, Mughal India or Ottoman Empire attracted so many Persian scholars and litterateurs, virtually creating an intellectual drain in Safavid Persia. Islam also became a significant factor in providing a sense of shared literature and scholarship, shared devotional practices and shared historical past and identity.

When we look at the gigantic proportion of the Ottoman or Mughal Empires established by the Turks in Anatolia (Asia Minor) and India respectively during the fifteenth and sixteenth centuries, we also need to take note of the emergence of a new understanding of Islam as a religion and culture. Information and knowledge in the pre-colonial and colonial political systems were large, though not exclusively, manned by scribes, writers and statesmen possessing a grasp of the chief language of power in those times, namely Persian.

Further, the Sufi tradition and the all-encompassing Persian literary culture which laid emphasis on accommodation and compromise were now becoming increasingly central to state-building. But what is of greater significance is the fact that besides the enormous increase in the scale of this coordination and accommodation, many of the native Ottoman and Mughal elite began to identify themselves not simply with the state system but also with the new Persian culture. Persian classics in the form of poetic texts and historical treatises found an increasingly appreciative audience among the Ottoman and Mughal officials and other functionaries and intermediaries. Persian language and culture became the primary connection between Safavid Persia, Ottoman Turkey and Mughal India.

Ottoman and Mughal historical works composed in Persian occupy an important place in the corpus of court-oriented historical writing of that period. Although the foremost literary language of the Ottoman realm was Turkish; Persian, considered an elite language, became a preferred medium for projecting a flamboyant imperial image; simultaneously, it also became an alternative linguistic medium for composing poetry and historical treatises. Ottoman histories composed in Persian began to be written in the fifteenth century and were held in great esteem by Ottoman scholars’ along with the Turkish works. These works remained popular until the end of the sixteenth century in the Ottoman Empire. The esteem accorded to Persian compositions, as well as the influence of Persian works on subsequent Ottoman historical writing, is immense.

As early as the eighth century, Central and Southern parts of Europe, especially Spain, had been conquered by the Muslims. Although this victory had established the beginning of a new cultural landscape in Spain, within the next few centuries the Seljuks,  a Sunni Muslim Turkish confederation, had begun to rule much of Central Asia and Anatolia between 1071 and 1194. The rise of this Turkic empire introduced a new power into the region and played a major role in defending the Islamic world against the Crusaders, and conquered large parts of the Byzantine Empire.

Even before their dominance started in Anatolia, the Seljuks, were in touch with Persian civilization and culture and had accepted Persian as their court language. And after the conquest of Anatolia, although various Turkish dialects were in use in the Seljuk dominions, the court and literary language of the whole kingdom continued to be Persian.

The Seljuks had founded Islamic schools in all the regions they conquered. Persian was adopted as the language of literature and philosophy and developed as an integral part of the curriculum in most of these schools. In addition to schools, the khanqahs or Sufi hospices were also instrumental in promoting the Persian language as the appropriate language for poetic and literary texts. In general, the dervishes of the Mevlevi Order, Bektashi Order, and Khawati Order played a pivotal role in the promotion and popularity of the Persian language.

When the Ottomans came to power, like the Seljuk rulers, they too promoted and supported the Persian language in their royal court and the Sufi khanqahs. The spread of the Persian language through the Mevlevi shrines had made it the dialect of the Sufis other than the language of the government. Under such influence, landmark influential texts were composed in prose and poetry by eminent poets and litterateurs such as Attar Nishapuri, Saadi, Hafiz, and Jalaluddin Rumi. By the thirteenth century, Anatolia had become a safe refuge for many scholars, writers, poets, and bureaucrats who had been forced to leave their home on account of political turmoil.

Before Shah Ismail, the founder of the Safavid dynasty, consolidated his power, Persia was considered the real literary and cultural centre from where the Seljuks, Ottomans and the Muslims in India drew inspiration and power. The people living in these vast regions had relegated Arabic to the background and adopted the Persian language. As a result, these territories drew inspiration from the profound Persian artistic and architectural achievements and were naturally being drawn into the vast orbit of Persian culture.

In these circumstances, it is not surprising that the Persian language and culture helped celebrate a magnificent imperial ideology and a sophisticated civilization of the Ottoman and Mughal emperors. It provided a means by which extended motifs of the Persian world shaped Ottoman and Mughal imperial practices. The Ottoman and Mughal sultans and those closest to them were represented in lofty jargon. The adoption of the title Shahanshah, one of the most evocative symbols of Persian imperial rule, for the sultan from the fifteenth century onwards is a conspicuous example of the Ottoman-Mughal adoption of Persian regal vocabulary. By comparing the Ottoman and Mughal rulers and high officials to mythical and historical figures, historical works based on Persianate imperial concepts of rulership brought into context a distinguished and extraordinary ceremonial image. Thus, the high culture of Persia emulated in the Mughal and Ottoman empires brought them on a common page.

Thus, the Safavid, Ottoman and Mughal state rather than demonstrating to be developed institutional structures at a given point of time could be seen more as processes incorporating and adjusting to the local traditions as well as to the traditions of the new regions that were integrated into the empire over the years.

The Near East is a geographical term that includes the transcontinental region of West Asia, Turkey, and Egypt until Iran. Despite having varying definitions within different academic circles, the term was originally applied to show the maximum extent of the Ottoman Empire.  Oxford Dictionary of English (2nd Ed.), Oxford University Press, Oxford, 2003.

The prolonged conflict between the Ottomans and the Safavids was based on territorial and religious differences. As Sunni Muslims, the Ottoman emperors disagreed with the Shia Safavid rulers over basic religious tenets and practices, similar to the disputes between various Catholic and Protestant powers in Europe. Alam, Muzaffar and Subrahmanyam, Sanjay, Writing the Mughal World: Studies on Culture and Politics, Kindle Edition Columbia University Press, 2011.

The Seljuks were a medieval Turko-Persian Sunni Muslim empire, originating from the Qiniq branch of Oghuz Turks, who founded an empire that included Mesopotamia, Syria, Palestine, and most of Persia. Their advance marked the beginning of Turkish power in the Middle East. A. C. S. Peacock & Sara Nur Yildiz ed., The Seljuks of Anatolia: Court and Society in the Medieval Middle East, I B Tauris & Co Ltd, London, 2013.

From the beginning, the Seljuks had submitted to the authority of the Caliphate in Baghdad and followed the Ghaznavids who had accepted the Arabic language as the diplomatic language of their kingdom. Arabic was the language of all reports and correspondence. However, the management and organization of the courts and most critical institutions were handed over to the Persians. Johanson, Lars and Bulut, Christiane edited, Turkic-Iranian Contact Areas: Historical and Linguistic Aspects, Harrassowitz Werlag, Wiesben, 2006.