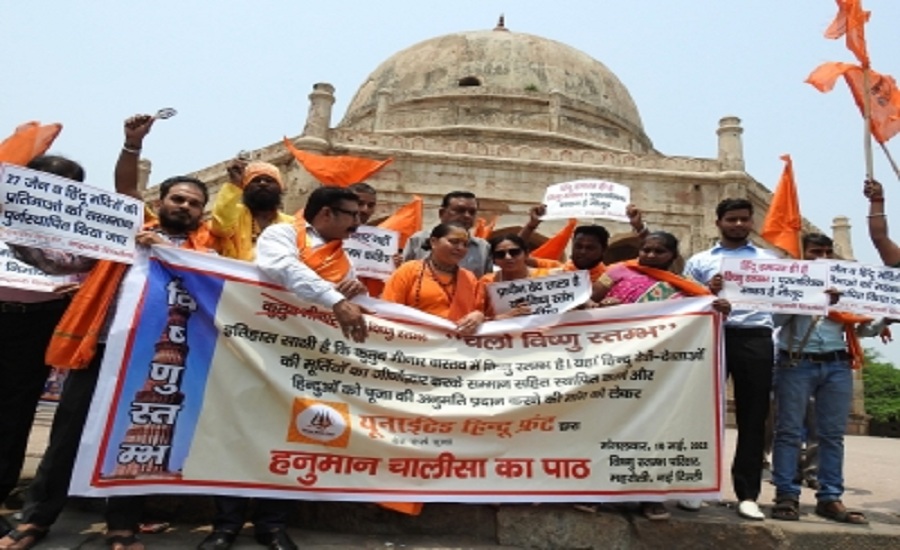 After a petition was filed in Allahabad High Court claiming Taj Mahal to be a Shiva temple, Hindutva groups targeted another national heritage, Qutab Minar located here demanding that it be declared as a ‘Vishnu Sthamb’.

On Tuesday, a group of people associated with United Hindu Front (UHF) gathered at the medieval era archaeological marvel Qutab Minar with the intent to recite Hanuman Chalisa. However, timely intervention of police saved the situation.

The police arrested the activists of the UHF and kept its chief Jaibhagwan Goyal under house arrest for demonstrating at the site of the heritage site holding saffron flags and chanting ‘Jai Shri Ram’. Goyal is also a Bharatiya Janata Party leader and national president of Rashtravadi Shiv Sena.

In a memorandum submitted to Union Home Minister Amit Shah, Goyal claimed that the heritage site, which was built during early Muslim rule in India by Qutabuddin Aaibak of the Slave dynasty, is actually a Vishnu temple.

The memorandum reads: “It is well-known that and specified clearly on the walls of the complex that it was constructed from the material got after demolishing 27 temples. There are statues of Hindu gods in the complex. Any self-determined Hindu can feel angered by seeing the Ganesh idols inside. The idols of Ganesh have been kept upside down and inside a cage to insult Hindu sentiments.”

According to Delhi Tourism, Qutab Minar is a soaring 73 m-high tower of victory built in 1193 by Qutab-ud-din Aibak immediately after the defeat of Delhi’s last kingdom. The tower has five distinct storeys each marked by a projecting balcony which tapers from a 15 m diameter at the base to just 2.5 m at the top.

In his memorandum, Goyal wants Qutab Minar named ‘Vishnu Stambh and the 27 temples, which he claimed were demolished while constructing the minar, rebuilt for ‘pooja-aarti’ inside them.

The police cited lack of permission for the protest for the detention of the 40 protestors on the charge of violation of laws. Reacting to the developments, renowned journalist and activist, Rana Ayyub, said, “It always starts with the fringe, then the survey, then the mob and finally a clean chit by the judiciary”.

Earlier, a local BJP leader, Rajanish Kumar Singh from Ayodhya, filed a petition in the Allahabad High Court demanding opening of the closed room inside Taj Mahal to ascertain whether there are Hindu idols and scriptures inside. The petition claimed that the Taj is actually a Shiva temple.

In the past, Hindutva activists recited Shiv Chalisa (hymns in praise of Lord Shiva) inside the Taj Mahal complex in Agra on the occasion of Mahashivratri. Some members of Hindu Jagaran Manch, a Hindutva outfit, including its district president Gauravn Thakur, had been arrested by the police after they waved saffron flags inside the monument a few months back.

Reacting to the petition, Human rights activist Kavita Shrivastva said, “The Hindutvavaadis will not stop till all important Muslim shrines and relics are declared as Hindu shrines. They will take the Qutub Minar, Baba Budangiri, Taj Mahal apart from Gyanvapi and Syed mosque in Mathura and others. They are already in court for Tajmahal”.