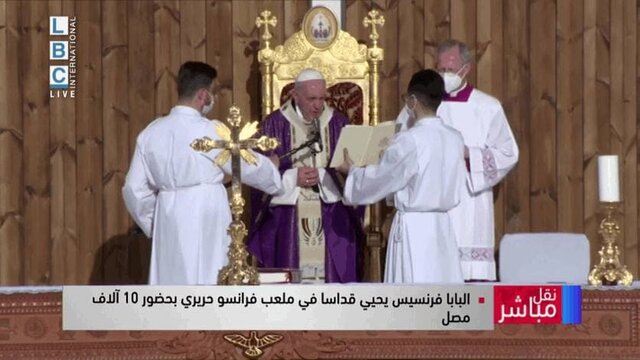 The Lord’s Supper ceremony was held in the presence of Pope Francis at the Franso Hariri Stadium with the participation of 10,000 people.

Pope Francis, the leader of the world’s Catholics, left for Erbil, the capital of the Iraqi Kurdistan region, on Sunday after a trip to the city of Qarqush in Ninawa province, to hold a communion ceremony with the presence of 10,000 people at the Franso Hariri Stadium.

The pope, who is on an official visit to Iraq, held meetings and ceremonies in Baghdad and Najaf Ashraf over the past two days, the most important of which was meeting with the Grand Ayatollah Sistani, the Supreme Religious Authority at his home in Najaf Ashraf.

The pope was enthusiastically welcomed by the people in Erbil, and was greeted by Kurdish regional officials at the airport and by people on the streets.

Pope Francis held a communion Ceremony at the Franso Hariri Stadium in Erbil, which is part of the Christian religious rituals.

“Many of your brothers here in Iraq are suffering from violence,” he said at the ceremony and noted: “Our hearts must be pure and free from lies and hypocrisy.”

“We need to eradicate greed for power while our brothers and sisters are suffering,” he said.

He emphasized: “Your patience and kindness made me come to Iraq and I appreciate you.”