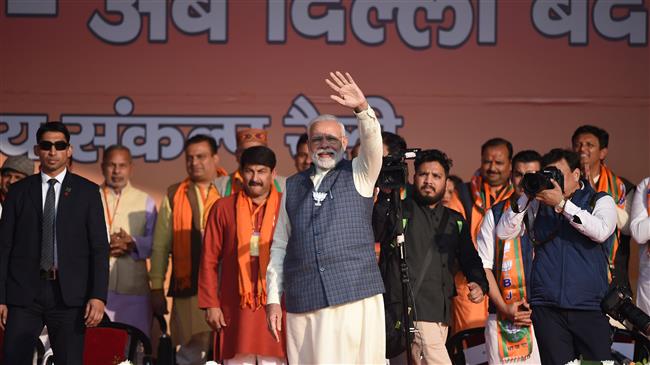 Prime Minister Narendra Modi says India is targeting defense exports worth $5 billion in the next five years in a bid to boost local manufacturing.

“In the last five years India has made remarkable progress in indigenising the production of military equipment,” Modi said at the opening of a defense fair in the northern Indian city of Lucknow on Wednesday.

The country is the world’s second-largest arms importer after Saudi Arabia, according to the Stockholm International Peace Research Institute, but Modi wants to turn that around under an ambitious “Made in India” initiative.

The five-day defense expo — which will include demonstrations of land, naval, air and virtual security systems — is being attended by manufacturers from France, the US and Russia, Delhi’s biggest arms supplier.

Last year Indian officials said they were looking to spend $130 billion over five to seven years on defense.

More than 1,000 firms — including 172 foreign companies — are expected to take part in the exhibition, the defense ministry said in a statement.

In a separate development, the construction of a grand Hindu temple at holy site bitterly contested with Muslims moved a step closer Wednesday when Indian Premier Modi said a trust had been finalized to oversee the project.

The razing of a mosque at Ayodhya by a huge crowd of Hindu zealots almost 30 years ago unleashed some of the country’s worst sectarian violence since independence, with more than 2,000 people killed. After a decades-long legal battle, India’s highest court ruled in November that the land in northern India should be managed by a trust to oversee the construction of a temple.

Modi announced in parliament, to applause and chants of “Hail Lord Ram” from party supporters, that the trust has now been set up.

“Let us all support the construction of a grand Ram Temple in Ayodhya,” Modi said, referring to the deity it will be named after.

The temple construction had been a campaign pledge of Modi’s Hindu nationalist Bharatiya Janata Party (BJP) even before the mosque’s demolition in 1992.

In 2002, when Modi was chief minister of Gujarat state, 59 Hindu activists died in a blaze on a train from Ayodhya, leading to riots that saw upwards of 1,000 people perish, mostly Muslims.

For critics, the temple construction forms part of Modi’s alleged master plan to remould the country as a Hindu nation, something he denies.

The temple will be built on 67 acres (27 hectares), while five acres on the outskirts of Ayodhya will be handed over to a Muslim body for the construction of a mosque, the Press Trust of India reported.

India’s powerful Home Minister Amit Shah welcomed Modi’s announcement, saying a centuries-old wait for the temple was over, and people would be finally able to worship at Ram’s birthplace.