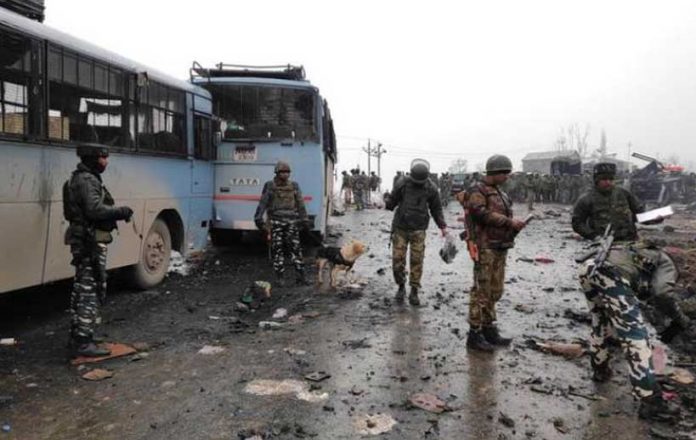 On 14 February 2019, a terror attack killed 40 Indian soldiers at Pulwama, Jammu and Kashmir (IOK). The unfortunate incident happened when a convey of Indian soldiers were hit by an SUV full of explosives. The incident was condemned by leaders from all over the world including Pakistani Prime Minister Imran Khan. Mr. Khan immediately offered help to probe the incident and provide any possible help to find and capture the culprits. But the Indian government without proper investigation blame Pakistan for the Pulwama attack and showed intentions of strong retaliation.

The Pulwama attack created a serious deadlock between the two nuclear-armed countries. Pakistan called the Pulwama attack a “false flag operation” while India was all set for retaliation. The situation between the countries turned to an “international crisis” when Indian warplanes in the early morning of 26 February crossed the border and dropped bombs in Pakistani territory.

On the very next day, Pakistan conducts an airstrike in the Indian territory and shot down an Indian warplane. The Indian pilot Abhinandan was captured by Pakistani forces. The Balakot incident nearly damaged world peace as the two nuclear-armed states were ready for military conflict. However, Pakistan showed its longstanding desire for peace in the region by releasing the Indian pilot Abhinandan and exposing Modi’s false flag operation.

The Pakistani authorities called the Pulwama attack and the Balakot airstrikes as false flag operations conducted by fascist Modi’s regime to gain popular support in the upcoming election. The operation aimed to divert the public’s attention from domestic issues and create a regional crisis until the general election which was due in April of that year. But the Indian government denied all the allegations and blamed Pakistan for the Pulwama attack without any evidence.

However, during the recent police investigation of Arnab Goswami, the police have retrieved his WhatsApp which has exposed the Indian narrative of the Pulwama attack and Balakot Incident. Arnab Goswami is a renowned Indian journalist and strong supporter of Modi’s regime. During his conversation with Partho Dasgupta on 23 February 2019, Goswami hinted towards the Balakot airstrike and its importance for Prime Minister Modi in the upcoming election. Goswami texted “something big will happen”.

After a few messages on other matters, Dasgupta asked, “Dawood?”, referring to the notorious gangster who is wanted in several cases.

Arnab Goswami: “No sir Pakistan. Something major will be done this time.”

Partho Dasgupta: “It’s good for big man in this season.”

Partho Dasgupta: “He will sweep polls then.”

Arnab Goswami: “Bigger than a normal strike. And also, at the same time something major on Kashmir. In Pakistan, the government is confident of striking in a way that people will be elated. Exact words used.”

The police investigation of Arnab Goswami and leaked chats has exposed the Indian propaganda and vindicated Pakistan’s longstanding standing stance on Indian false flag operation. Prime Minister Imran Khan has asked for the world’s attention towards the Indian propaganda while saying “In 2019, I spoke at UNGA on how India’s fascist Modi govt used the Balakot crisis for domestic electoral gains. Latest revelations from communication of an Indian journalist, known for his warmongering, reveal the unholy nexus between the Modi govt & Indian media”.

Indian false flag operations like the Pulwama attack and Balakot airstrike are part of India’s Hybrid warfare against Pakistan. As I have discussed in my previous article, India is trying to defame Pakistan through propaganda tactics and present Pakistan as a hub of terrorism. But the recently leaked chats have exposed India and vindicate Pakistan’s desire for peace in the region.