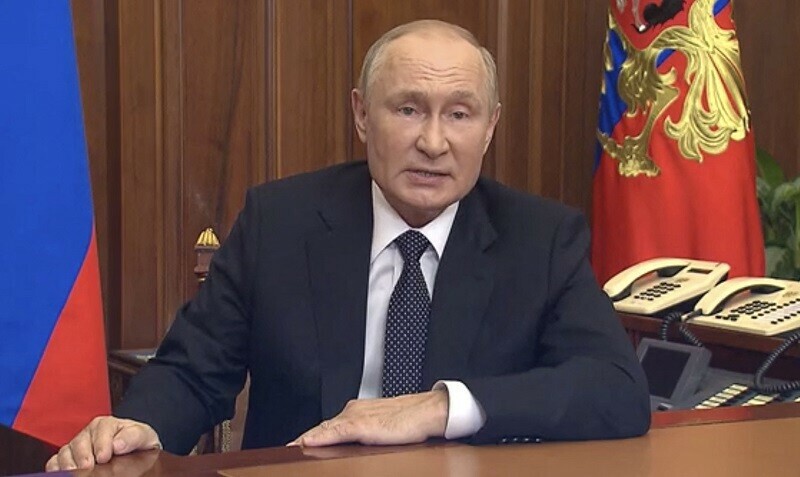 In a televised address, Putin said the partial mobilisation of its 2 million-strong military reserves was to defend Russia and its territories, claiming the West wants to destroy Russia and did not want peace in Ukraine.

To protect homeland, its sovereignty (), I consider it necessary to support the decision of the General Staff on partial mobilisation, he said.

Putin restated his aim was to “liberate” east Ukraine’s Donbas industrial heartland region and that most people in the region did not want to return to what he called the “yoke” of Ukraine.

Putin said the West had engaged in nuclear blackmail, but Russia had “lots of weapons to reply” and that he was not bluffing.

Russia already considers Luhansk and Donetsk, which together make up the Donbas region Moscow partially occupied in 2014, to be independent states.

Ukraine and the West consider all parts of Ukraine held by Russian forces to be illegally occupied.

Russia now holds about 60 per cent of Donetsk and had captured nearly all of Luhansk by July after slow advances during months of intense fighting.

Those gains are now under threat after Russian forces were driven from neighbouring Kharkiv province this month, losing control of their main supply lines for much of the Donetsk and Luhansk front lines.

In an apparently coordinated move, pro-Russian figures on Tuesday announced referendums for Sept. 23-27 in Luhansk, Donetsk, Kherson and Zaporizhzhia provinces, representing around 15pc of Ukrainian territory, or an area about the size of Hungary.

In an interview with Russian state television, Shoigu said that students and those who served as conscripts would not be called up, and that the majority of Russia’s millions-strong reserves would not be drafted.

Russia’s mobilisation was a predictable step that will prove extremely unpopular and underscores that the war is not going according to Moscow’s plan, Ukrainian presidential adviser Mykhailo Podolyak said in a response to Russia’s announcement.

Podolyak said in a text message to Reuters that Russian President Vladimir Putin was trying to shift the blame for starting an “unprovoked war” and Russia’s worsening economic situation onto the West.

“Absolutely predictable appeal, which looks more like an attempt to justify their own failure,” Podolyak wrote, giving the first reaction by Ukraine’s presidential office.

“The war is clearly not going according to Russia’s scenario and therefore required Putin to make extremely unpopular decisions to mobilize and severely restrict the rights of people.”

In a first, Saudi Arabia introduces yoga in...