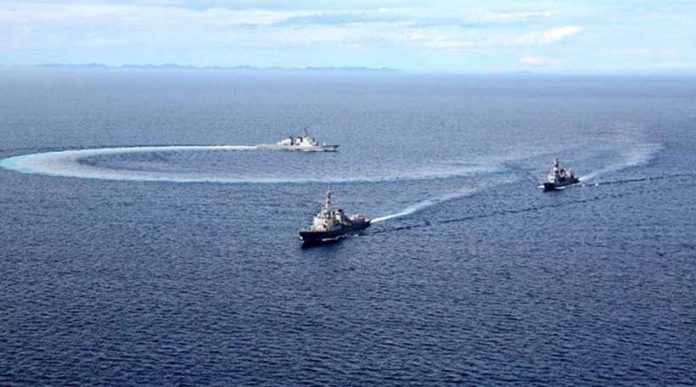 The joint military exercise of the Quad powers in the Bay of Bengal (BoB) is a major strategic development that has a direct impact on the littoral states. As popularly termed, the Quad war game in the Bay of Bengal has been one of the most talked-about issues in recent days. The ‘Quad’ has resurfaced after a gap of thirteen years, with a rising China firmly in its essence. Along with the Quad, Germany also declared it would deploy a warship to patrol the Indo-Pacific to safeguard the ‘international rules-based order’ in the BoB region from 2020 and onwards. Warships from the Quad nations, the U.S., Australia, India and Japan, kicked off the four-day, Phase-1 of the 24th Malabar naval exercise in the Bay of Bengalon November 3, 2020, highlighting complex anti-submarine warfare and other combat manoeuvres on the high seas. Phase-2 of the war games in the Arabian Sea from November 17 to 20 was “more power-packed”. The second phase made the participation of the Nimitz strike group of the U.S. Navy and Indian Navy’s Vikramaditya carrier battle group. The USS Nimitz is the world’s largest warship.

Quad is a platform for strategic dialogue between four powerful countries-US, Australia, Japan and India. It is also known as quadrilateral dialogue. In the world map, the four countries’ locations form a quadrilateral, a closed two-dimensional shape that has four straight sides. The objective of this group is to secure the Indo-Pacific region from hostile forces, primarily aiming at China. The idea behind this grouping was first proposed by former Japanese Prime Minister Shinzo Abe in 2007. After thirteen years, in 2020, the U.S., Australia, India and Japan turned this idea into reality. India once restricted the Malabar to a bilateral exercise with the U.S. for several years until Japan joined as a regular participant from 2015 onwards. Australia participated as a new entrant in the Malabar exercise in 2007, which had been blasted by China as a move by “an axis of democracies” designed to “counter and contain” it in the Indo-Pacific. In 2020, Australia joined the Malabar exercise after an invitation from India, making it the first time all members of the Quad had engaged in the military exercise.

The high-voltage exercise came amid India’s ongoing military confrontation with China in eastern Ladakh. The Australian and Indian defence ministries announced the expansion of the drills, which had been long-speculated. Australian Defense Minister Linda Reynolds believed the Malabar exercises were key to enhancing Australia’s maritime capabilities and showcased the “deep trust between four major Indo-Pacific democracies and their shared will to work together on common security interests.” The U.S., meanwhile, has increased the tempo of its naval and air missions in the South China Sea while pushing back at Beijing’s claims to the vast waterway. In a statement, India’s Defense Ministry said the four participants “collectively support free, open and inclusive Indo-Pacific and remain committed to a rules-based international order.”

Under QUAD 2.0, the participating countries have further extended their support base toward Western and Asian allies. There are signs that the Quad could expand to become the Quad Plus with the addition of countries like South Korea, Vietnam, and New Zealand. Germany has indicated that it would increase its presence in the Indo-Pacific. France, with its existing formidable presence in the Indian Ocean, may join the Quad. The U.S. has visibly distanced itself from the idea of the Quad being an ‘Asian NATO’ but has not denied the possibility of it attaining a similar status in future. One may argue that as American power is in decline in the Indo-Pacific, the need for depending more on partnerships like the Quad will increase. The Malabar naval exercises provide a model for Quad countries to expand their collective cooperation. As maritime challenges are a common ground, increasing interoperability between the navies should be a priority. Quad 2.0 has lent considerable assurance for the member nations toward a robust forum to check China’s growing influence and preserve a rule-based international order in the Indo-Pacific.

The so-called Quad war games in the form of the Malabar exercise have a profound impact on security and strategic scenarios in the Bay of Bengal. The Malabar exercise 2020 has sent a strong signal to China that the march of Pax Sinica will not go unchallenged. It is in the air that a follow up to the Malabar 2020 will be conducting the next Military Exercise in the South China Sea. Experts argue that the first step to overpowering the dragon would be to take the battle to its backyard. The Quad war games as a display of power and determination of the USA, India, Japan and Australia to contain and confront China is a part of the new strategic environment in the Bay of Bengal and the surrounding regions.

China, as the apparent target of this military display, has reacted critically. It is particularly significant when China emerges as the world’s largest Navy, surpassing even the U.S. in the number of warships if not technology, and has begun to assertively flex its muscles from the South China Sea region to the Indian Ocean. In 2018, Chinese Foreign Minister Wang Yi rejected the newly revived Quad and the Indo-Pacific concept as a ‘headline-grabbing idea’ that would ‘dissipate like seafoam.’ In October 2020, Wang blamed Washington for aiming to build a ‘so-called Indo-Pacific NATO.’ It shows how the Chinese government, who once used to downplay the Quad as an overhyped idea, is now highlighting it prominently, terming it as part of a broader American effort in the region to “contain” China.

While the Malabar exercise demonstrates a collective display of power and potential of Quad 2.0, the individual member has a vulnerability in bilateral frameworks with China. Tensions at bilateral relations between China and QUAD members have conflicting and complex calculations of interests. The dependence of Asian members of Quad on China for economic development and vice versa cannot be overlooked. Besides, individually these Asian powers have the much lesser military capability to deal with Beijing. New Delhi seems to be mindful of its vulnerability to Chinese retaliation along the border should the Quad take on a military dimension. Unlike Japan and Australia, India does not have the luxury of a formal alliance with the U.S. However, Japan needs to strike a balance in its goal to face Beijing over security issues while preserving its intertwined economic interests with China. For example, Japan’s exports to China amounted to $134.68 billion in 2019.Besides, India, Australia, and Japan have committed to the Quad at significant military and economic risks from China.

Although it is entirely from a different perspective, the Quad 2.0is bound to raise serious concerns to the littoral states of the Bay of Bengal, such as Bangladesh, Sri Lanka and the Maldives. Myanmar and Thailand should be equally concerned about such a kind of reality. A unique aspect of disquiets and threat perception of these countries is that they have strong relations with both sides of geopolitical rivalry – China vs Quad. Except for Myanmar, the rest of the BoB nations are dependent on both China and Quad members. It is a matter of profound strategic apprehension for a country like Bangladesh to pursue its development and security goals centring around the BoB. Peace and stability in the BoB are the highest priority of Bangladesh, for which the country has already expressed strong support for cooperation and collaboration not only in the BoB region but also in the larger Indian Ocean region. The confrontational positions as observed between the Quad and China and China and the Quad tend to make a warring situation in the Bay of Bengal.

In hindsight, the military regime and perpetrator of genocide against the Rohingyas in Myanmar takes full advantage of hegemonic competition between China and Quad nations. The military exercises are part of a larger strategic ‘great game’ of global and regional powers. Common citizens and the stateless Rohingyas of Myanmar are paying the price in blood and pains. The spike of tensions in the Bay of Bengal is a bonanza for the post-coup military regime in Myanmar. Both Quad members and China may find the strategic rationale in their continuing rivalry, but the BoB region and its littoral states suffer heavily. More than 1.5 billion people in the region who have been coming out from poverty and underdevelopment in recent years would find these war games as a thoughtless and needless destructive exercise for their future. 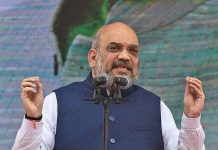