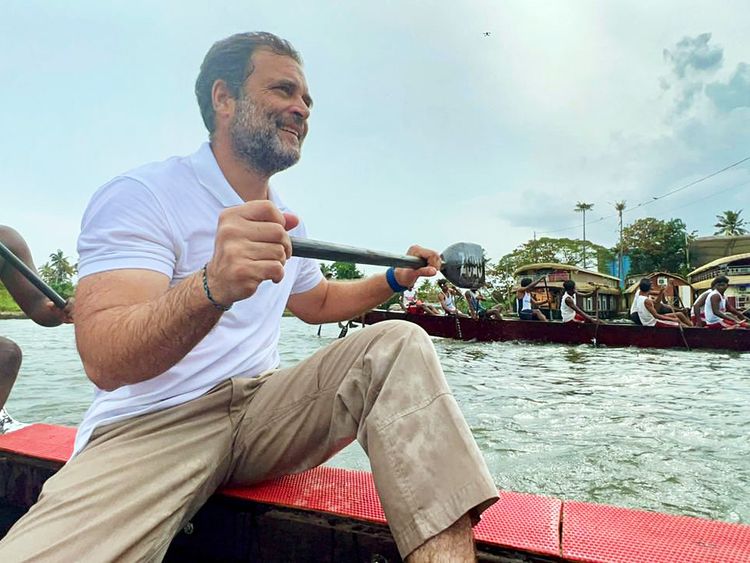 On the 12th day of his Bharat Jodo Yatra, Congress leader Rahul Gandhi on Monday appeared to have gone back into history and repeat what his great grandfather, the then Prime Minister Jawaharlal Nehru, did way back in 1952, while on a visit to Alappuzha.

Gandhi was discussing the problems faced by the fishing community when he ‘jumped’ into a snake boat in the Vembanad Lake and took part as an oarsman along with former Alappuzha Lok Sabha member and present AICC general secretary K.C. Venugopal.

Seated in the middle portion of the snake boat, while all the other oarsmen did a professional job in taking the boat forward with perfect timing, Gandhi and Venugopal found the going tough as was evident when the boat crossed the finishing line, and Gandhi was seen wiping his face with relief.

Congress leader Rahul Gandhi participates in a snake boat race exhibition in Punnamada lake of Kerala on Monday, Sept. 19, 2022. — Twitter photo
The snake boat race especially the most popular one — Nehru Boat Race held at the Vembanad lake in Alappuzha — has now become part of the itinerary of global tourists. It dates back to 1952, when the then Prime Minister Jawaharlal Nehru visited the state and a flotilla of boats accompanied him from Kottayam to Alappuzha.

It was an impromptu race conducted in Nehru’s honour.

Nehru, who was thrilled by the performance of the oarsmen, jumped into a snake boat.

On returning to Delhi, Nehru donated a silver trophy, a replica of a snake boat placed on a wooden abacus with an inscription and his signature. This is the trophy that the winner in the snake boat race is awarded. :

Hadith Graph: “Whoever is abandoned by near ones …”