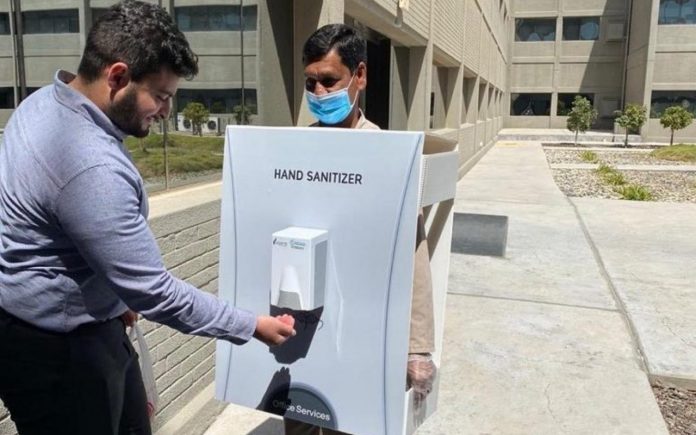 Viral images of a foreign worker walking the halls of the giant Saudi oil company Aramco while wearing a large hand sanitizer costume has been widely condemned as being racist and indictive of Saudi’s often exploitative treatment of foreign workers.

In the viral images, the worker can be seen wearing a costume of a box of hand sanitizer, while wearing a face mask. He can be seen standing in the halls and outside the perimeter of the oil company’s building, while staff and workers can be seen going up to him. Happening amidst the ongoing coronavirus panic, many have pointed towards the deeper implications of an act like this.

Users on Twitter quickly complained that not only was this a racist and humiliating act, but that this is only one example of the often worrying treatment foreign workers get while in Saudi Arabia.

Some Twitter users also called this a part of a larger issue of “modern-day slavery” prominent in the Kingdom. Saudi Arabia, along with other Gulf states, have previously come under fire for its abuses against foreign workers – from the abuse of the thousands of foreign domestic workers and maids who continue to be tortured and unprotected to the laborers who continue to suffer and even die under circumstances possibly linked to willful neglect, Saudi Arabia and its neighbors have not had an encouraging track record when it comes to the human or even basic rights of foreign workers.

Responding to the viral condemnation following the photos, Aramco issued a short response:

The company has immediately stopped this act and has taken steps to prevent it from happening again.”

Since the outbreak of Coronavirus, officially known as COVID-19, racism has played a large part in the reactions of societies across the world, with many minorities and people of East Asian backgrounds targetted in horrifying circumstances. From the attack on a Singaporean student in London to the sickening video of an East Asian tourist being mocked and thrown out of a taxi in the middle of a highway in Cairo, there is no shortage of examples of the horrifying extent racism has played in the reactions towards COVID-19.