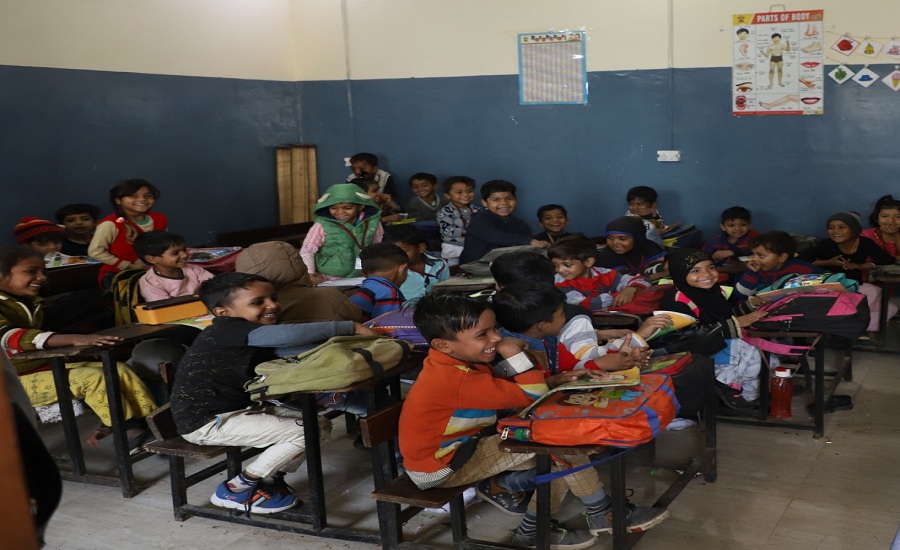 A school started exclusively to impart education among the children of Delhi riot victims is being run successfully with around 300 students on its roll. The children enrolled with the school are those who are directly or indirectly affected by devastating communal violence that broke out in northeast Delhi in February 2020.

Of the 300-odd children studying at the school, 23 are those who have lost either of their parents, father or mother, to the riots.

Named Sunrise Public School, the school is located in Ghaziabad’s Loni. It has been run by an IIT research scholar, Aasif Mujtaba, under an NGO, Miles2Smile, since September 2020.

Talking to Clarion India, Mujtaba, who was one of those student activists who started Shaheen Bagh sit-in against the Citizen Amendment Act (CAA), said soon after the violence broke out in northeast Delhi in February 2020, he had started relief and rehabilitation work for the victims under the banner of his NGO.

While working with the victims, Mujtaba realised that the children are the most vulnerable in the aftermath of the riots. He said. “Many of the children, who had watched the violence taking place in front of their very eyes, will live with the trauma throughout their life. Houses and shops burning and people hounded by marauding goons running helter-skelter to save their lives still haunt them.”

“I realised as victims of the riots, these children are exposed to the vagaries of life. Some of them who have lost either or both their parents to the riots are badly in need of financial and social support. Hence, I decided to focus on them.”

He started with collecting data of the riot-affected children, and those whose families can’t afford their education. In the first round, he found 60 such children and in the second, he was able to gather the data of 150 children. “Initially the parents were not ready to send their wards to the school. Instead they wanted to send them to work so that they could earn a living,” he said.

In the meantime, schools were closing due to a strict lockdown imposed by the government. At this juncture, the idea of imparting education among these children struck him. He conceptualised the school exclusively for the children affected by the riots keeping in need of their special needs as traumatized kids.

During this period, Mujtaba came to know about ‘Sunrise Public School’. It in a dilapidated condition, and due to the lockdown, chances of the school’s survival were bleak. The school authorities had decided to shut it down or convert it into a shopping complex or anything else. Mujtaba took possession of the school on rent and started classes in September 2020. He started the school with over 148 kids, and today it boasts of 300 students.

In the beginning, the school had to contend with covid induced restrictions and migration of the families. Very few students could attend online classes as most of them couldn’t afford smartphones. Recently, after the covid restrictions were lifted, the strength of schools went up. Only last month, the number of students touched the 300 mark as the school bought a bus to ferry the students.

The school has classes from nursery to eight. Students from 5 to 16 are enrolled with the school. Special classes are also conducted for those who don’t fit into any of these classes. They come from such backgrounds where no education or only religious education was given.

The school has 10 teachers. The subjects are taught here according to the CBSE pattern along with Urdu and Islamic studies.

Sharing his experience of dealing with the students, Mujtaba said, “Whenever I get upset and demoralised due to the Islamophobic atmosphere of the country, I see these children for motivation.”

Talking about the impact of the communal violence on the students, he said, “They are still traumatised. They could not overcome the trauma as yet… We are planning to conduct a wellbeing session with the help of a psychiatrist for them.”

Islamuddin, who is teaching social science and Hindi at the school for the past one year, said the teachers here have to face a lot of difficulties in dealing with the students, especially those who have witnessed the violence. There were two categories of the riot-affected children, one is of those whose family members or parents were killed in the riots and have seen violence through their own eyes, and the other is of those who fled the scene of violence and did not see the violence and arson.

“We faced a lot of difficulties in dealing with the directly affected children. They don’t talk and tend to avoid the company of anyone. Visuals of violence are still fresh in their memories. Sometimes, such children suddenly develop withdrawal symptoms,” he said.

16-year-old Fiza, whose father Mudassir was killed during the riots, started crying when a play on parents was being staged in an outdoor event. Ever since, Islamuddin says they are careful about talking about the matters that bring the visuals of violence back to their minds.

The children directly affected by the riots do not like to talk about what had happened with their family members while the indirectly affected ones have no qualms about talking about such things. The kids from nursery to Class IV do not feel comfortable when their seniors talk about it, he said.

In pictures: Russian forces launch invasion of Ukraine with strikes on defences