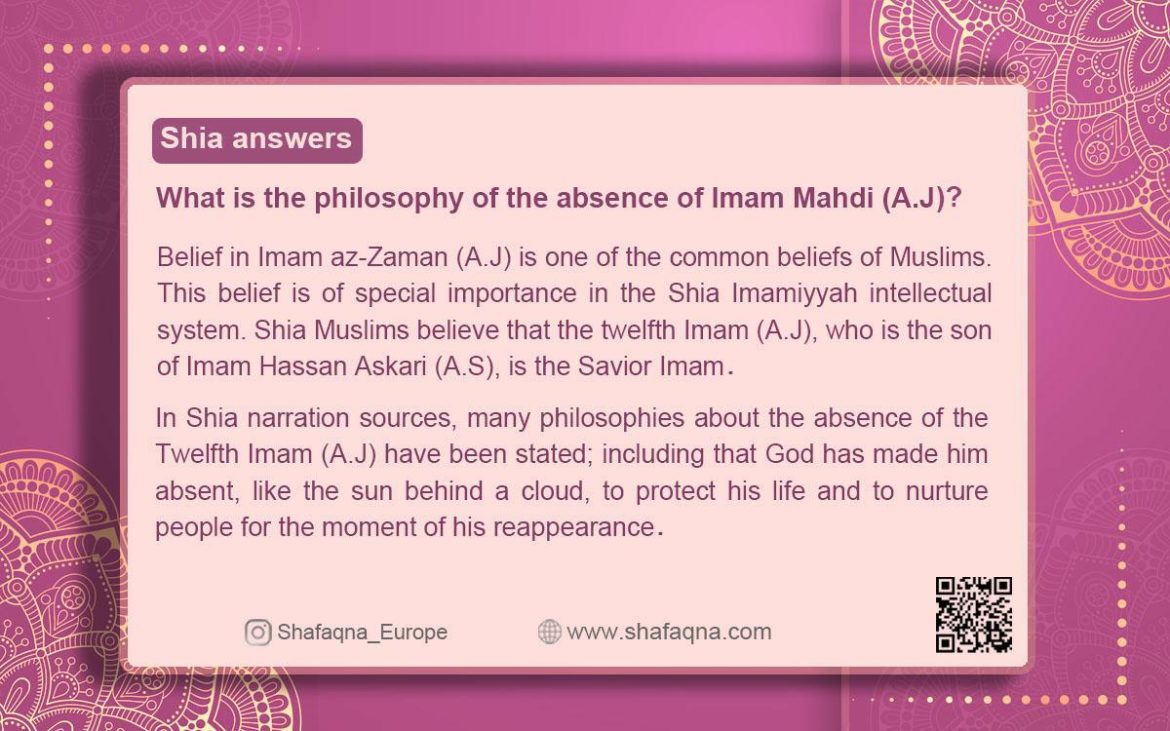 Shia answers: What is the phoilosophy of absence of Imam Mahdi (AJ)?

SHAFAQNA- What is the philosophy of the absence of Imam Mahdi (AJ)?

Belief in Imam Az-Zaman (AJ) is one of the common beliefs of Muslims. This belief is of special importance in the Shia Imamiyyah intellectual system. Shia Muslims believe that the twelfth Imam (AJ), who is the son of Imam Hassan Askari (AS), is the Savior Imam.

In Shia narration sources, many philosophies about the occultation of the Twelfth Imam (AJ) have been stated; including that God has made him absent, like the sun behind a cloud, to protect his life and to nurture people for the moment of his reappearance. 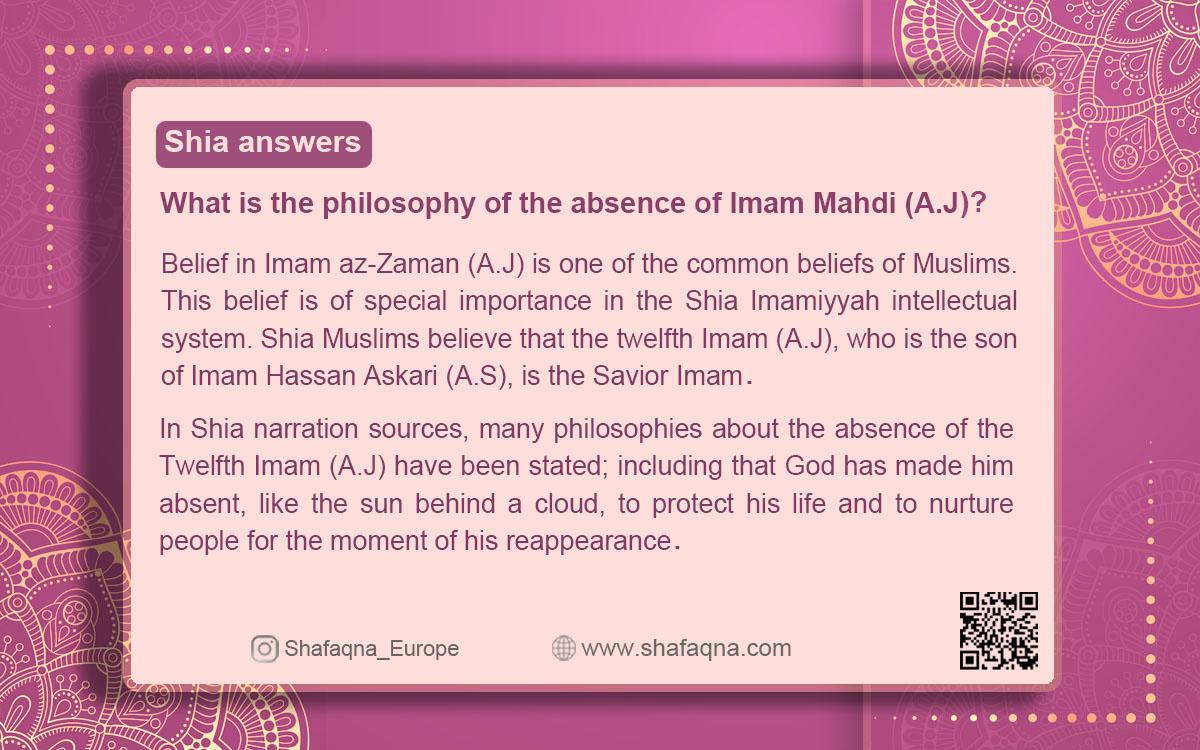 Belief in Imam Az-Zaman (AJ), with whose reappearance the world will be filled with justice, is one of the common beliefs of Muslims. This belief is of special importance in the Shia Imamiyyah intellectual system.
Shia Muslims believe that the twelfth Imam (AJ), who is the son of Imam Hassan Askari (A.S), is the Savior Imam. In Shia narration sources, many philosophies about the occultation of the Twelfth Imam (AJ) have been stated, and here we briefly mention two important ones:

1- Protecting the life of Imam

The presence of the divine Imam has always been a serious danger to the leaders of oppression and destruction, and often the prophets and divine Imams have been martyred in the path of guiding humanity by the tyrants of their time.

On the other hand, according to Imamiyyah beliefs, Imam Mahdi (AJ) is the last divine reserve that must remain alive for the realization of universal justice, which is the absolute promise of God. As a result, in order to save the life of the twelfth Imam (AJ), God disappeared him so that he would not be present in the eyes of others in a normal way, and otherwise he, like his noble fathers, undoubtedly welcomes martyrdom in the path of fulfilling divine goals. Therefore, in Shia sources, “protecting the life of the Imam” is one of the main reasons for the absence of Imam Az-Zaman (AJ).

As an example, It is narrated from Imam Hasan Al-Askari (AS) that: “The Banu Umayya and the Banu Abbās sharpened their swords for us; Because they knew very well that they had no right in the caliphate. Fearing that the caliphate would return to its place and be established among its original owners, they tried to kill the Ahlul-Bayt of the Prophet (PBUH) and destroy his dynasty, so that they might prevent the birth of Imam Mahdi (AJ) or kill him; But God willed not to reveal him to any of the enemies, and he completed his light; Although the pagans are not happy.”

2. People to know the value of Imam Az-Zaman (AJ)

One of the important reasons and secrets of the absence of Imam Mahdi (AJ) is that people should pay attention to the value and status of that Imam. After all the ingratitude that has been inflicted on Imams by humans throughout history, God willed to hide the illuminated sun of his last reserve behind the cloud of occultation, so that the precious essence of his existence in darkness and gloom is more appreciated and his reappearance is met with full acceptance by the people.

As a result, one of the important factors in the absence of the Twelfth Imam (A.J) is the lack of support and obedience of the people to him and the weakness and negligence in helping the Imam. As the previous Imams suffered a lot from this area, and to be more precise, It is people who have disappeared from the Imam of their time due to their improper actions.

This divine discipline is the same issue about which there are many narrations, including the narration of Imam Muhammad Baqir (A.S) who said: “When God is displeased with our existence among a people, He will make us absent from them.”

It is also narrated from Imam Ali (A.S) in this regard, that: “O people, know that the earth is never empty of divine authority, but God deprives people of the sight of His argument because of the oppression they commit and also because of the extravagance they commit against themselves.”

The conclusion is that belief in the Imam of the Savior is one of the common beliefs of Muslims. The Shias consider the twelfth Imam (A.S) to be the Imam of the Savior, whom God has absent, like the sun behind a cloud, in order to protect his life and to nurture the people for the moment of his reappearance.