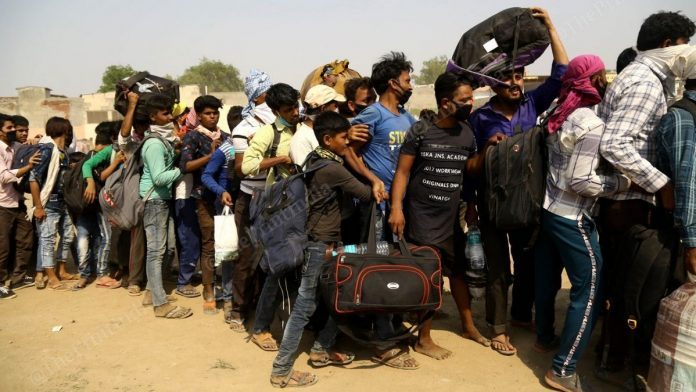 Ghaziabad: Chaos and confusion prevailed Monday at the Ramlila Ground in Ghaziabad, Uttar Pradesh, where hundreds of migrant workers had gathered to register for the three Shramik Special trains that were scheduled to leave for other parts of the state later in the day.

Desperate to go home, migrant workers violated social distancing norms and broke queues to register for these trains, and then to board buses that would take them to the departure station, Ghaziabad Junction.

Police officials and civil defence volunteers struggled to control the swelling crowd, while several migrant workers claimed they were being asked to board and de-board buses as there was no clarity over which serial numbers would go where.

“Why have they bothered to issue passes with serial numbers when there’s no system in place?” said Shambhu Gupta, a daily wage labourer going to Gorakhpur.

Police and volunteers, meanwhile, claimed the workers were not listening despite repeated announcements.

“We are making announcements to keep 1.5-metre distance; we are assuring them that everyone will get to go home, but they aren’t listening at all,” said constable Mohammad Iqbal.

At the Ramlila Ground, migrant workers were being brought in from nearby government shelters. Workers who were attempting to walk back to their villages were also brought in by the Ghaziabad Police. The migrants first had to queue up to register for the trains.

“They are being issued passes for the buses after Aadhaar verification. Those without Aadhaar are being asked to note down their destination addresses in detail. They then have to undergo a medical examination and then they can board the buses,” said constable Dinesh Kumar, who was in charge of keeping the crowd in order.

Ghaziabad District Authority officials were issuing the passes, UP health department officials were checking body temperatures, and only then were the migrant workers allowed to board the buses. Only 35 people were allowed in each bus, which had a seating capacity of 55.

Workers said social distancing was being followed initially when passes were being issued, but as the crowd swelled, the task got more and more difficult.

“By 12 pm, so many people had gathered here, it became very difficult to maintain social distancing. Moreover, they said anyone can board any bus once they have a pass, so that caused even more crowding. Then they said only 35 people according to serial number, so confusion ensued,” said Surya Prakash Chauhan, a daily wage labourer who was on his way to Gorakhpur.

When ThePrint asked police and GDA officials about the lack of social distancing, they said they were “helpless”.

“There are so many people. Even those who want to go to other places have landed up here in the hope of going home. It’s also very hot, so they have huddled together wherever there’s shade. We have promised them food and water. We are assuring them that everyone will go home. What else can we do?” said Diwakar, a BJP worker who was helping out with the registration process.

ThePrint attempted to reach Ghaziabad District Magistrate Ajay Shankar Pandey over the phone, but received no response until the time of publication of this report.

Some migrant workers said they were better off walking back home, rather than being taken to shelters or brought to the Ramlila Maidan.

Kavita Sharma, part of a group of 18 people walking to Jhansi, were taken to a shelter home in Sahibabad by the police.

“They promised us two days ago when they took us there that there’s a train at 7 am. But two days have gone. We come here every day, but there’s no train to Jhansi yet. There are so many people that my children could fall sick. They should’ve just let us walk home,” she said.