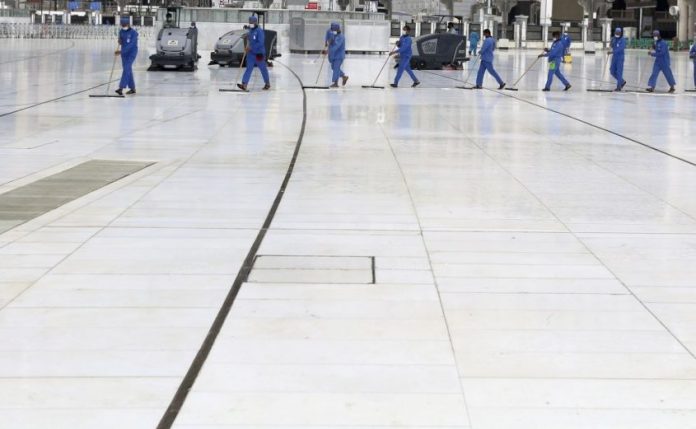 In place of the 2.5 million pilgrims who preformed the Hajj last year, only a very limited number of faithful anywhere from 1,000 to 10,000 are being allowed to take part in what is largely a symbolic pilgrimage amid the coronavirus outbreak.

“Right now, technology is our black horse to developing the whole hajj journey,” said al-Maddah, an electronics engineer with a PhD in robotics and artificial intelligence.

“We are taking every step possible to make sure that this hajj will end with zero cases of COVID-19 and also with zero deaths in our total hajj numbers,” he told The Associated Press.

Before pilgrims could even enter Mecca, they were given wristbands by the Saudi health ministry to monitor their movements and ensure the mandatory quarantine was observed. Thermal scanners are being used across the holy site to monitor people’s temperatures.

Each pilgrim is assigned to a group of around 20 others. A group leader will guide them throughout the hajj to each destination at a specified time, to avoid crowding in places like the Grand Mosque, where Muslims circle the Kaaba and follow a path travelled by the Prophet Abraham’s wife, Hagar.

On Mount Arafat, pilgrims will be wearing high-tech ID cards that connect to an application on their phones.

The card stores the pilgrims’ personal information, health status, residence and other Hajj-related details. In the future, Al-Maddah said the cards will be fitted with a location tracker to follow individual pilgrims’ movements. The tracker will be managed by a control room, and can be used as a pay card in place of cash, Technologytimes reported.

Al-Maddah said the cards will be fitted with a location tracker to follow individual pilgrims’ movements, Newindianexpress told.

The tracker will be managed by a control room, and can be used as a pay card in place of cash.

Pilgrims have also been given special attire to wear during the Hajj laced with silver nano technology that helps kill bacteria and makes clothes water-resistant.