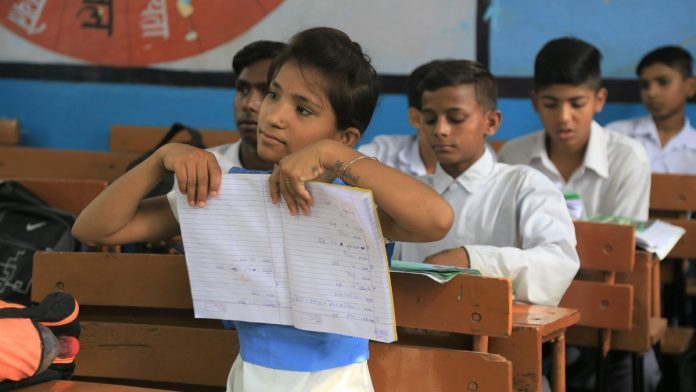 Travelling by road from Jammu to Kashmir in a shared taxi many years ago, I met a Kashmiri man who was returning home from Germany, where he was pursuing a PhD in Chemistry. “Where in Kashmir is your home?” I asked. He named his village in Baramulla.

My jaw dropped to think he was a ‘villager’ speaking in English and doing a PhD in Chemistry in Germany. I can’t imagine travelling from Lucknow to Kanpur and meeting rural youth speaking fluent English and pursuing PhDs at foreign universities. If you can find such a person, chances are that s/he is making it to the news as a rare achiever.

In Kashmir, even government schools are English ‘medium’, that is, students are taught everything in English, right from primary school.

Sheikh Abdullah’s land reforms are widely acknowledged as one of the reasons why Kashmir and Kashmiris became prosperous. One reason that is not acknowledged is the implementation of English medium education.

A visit to a government school in Baramulla and to one in Barabanki (Uttar Pradesh) will be enough to know the importance of English medium education.

Of course, the quality of education also matters. You could have a bad Science teacher speaking good English and a good Science teacher speaking Hindi. But the issue here is not merely the quality of education. There are enough people worried about and working on the ‘quality’ problem. The elephant in the room no one wants to address is how we are depriving millions of young Indians the opportunity to exploit the best of global opportunities.

English as the new Sanskrit

This is where the new National Education Policy (NEP) could have shown courage and recommended English medium education right from the primary level. There’s absolutely no parent in India who does not want to send their children to an English medium school. If a child in India is going to a non-English medium school, it means the parents couldn’t afford a better school.

Most government-run schools in India are non-English medium. Most state education boards offer the English medium option, but it is used only for some showcase institutions or by private schools affiliated to the state board.

The language divide cuts through all of India’s divides — caste, class, urban-rural, and so on. All politicians who argue for ‘mother tongue’ education should be asked to reveal whether they are sending their children to non-English medium schools. The answer will show how English has become the new Sanskrit: the language the elites use to deny knowledge, and thus better opportunities, to those they seek to exclude from the corridors of power.

Every now and then we hear of SC/ST students in engineering and medical colleges dying by suicides. Whether or not there was caste discrimination could be a matter of debate and investigation on a case by case basis. However, you will see that in most cases, the student came from a non-English medium background. Dalit intellectual Chandrabhan Prasad has long argued that English has been the greatest liberator of Dalits from caste hierarchy. No wonder then that we want to end access to English to the poorest Indians. How will we get cheap labour?

English as the new populism

Here’s an idea for a politician with courage: promise English medium education to all your voters, in all government schools, for all grades starting nursery. Let the mother tongue fanatics protest all they want. Voters will respond to such a promise with all their votes and then some. This will be the mother of all populist promises.

China, Japan, Germany, France and Italy are some examples of countries that have progressed and prospered in their native languages, the argument goes. You might be surprised to know how much these countries spend on English learning and translation. Even so, why should India not exploit the advantage of English it has, especially since decades of English-deprivation hasn’t helped?

Another reason why ‘mother tongue’ education doesn’t work is because the mother tongue fanatics insist on pure, Sanskritised language, bereft of any foreign influence. The Hindi in the textbooks is an alien language when compared to the Hindi we actually speak. The mother tongue fanatics have destroyed Hindi as a language with their purity nonsense — and they don’t want us to learn English either. As a result, you can find many Indians who aren’t good communicators in any language.

English for the knowledge economy

If we didn’t have English medium schools, we wouldn’t have had our information technology services outsourcing industry. We wouldn’t have many jobs — the software engineers making websites, answering customer calls, doing accounting and analysing data for English-speaking countries, all while sitting in India.

English along with the internet is a combination best suited for jobs, startups, global learning, prosperity, and bridging regional and global divides. The most revolutionary idea for India’s progress and prosperity in the 21st century would be to take English medium education to all government-run schools. Our continued submission to the nativist, regressive mother tongue wallahs is responsible for keeping India a poor, backward country.

The author is contributing editor, ThePrint. Views are personal.