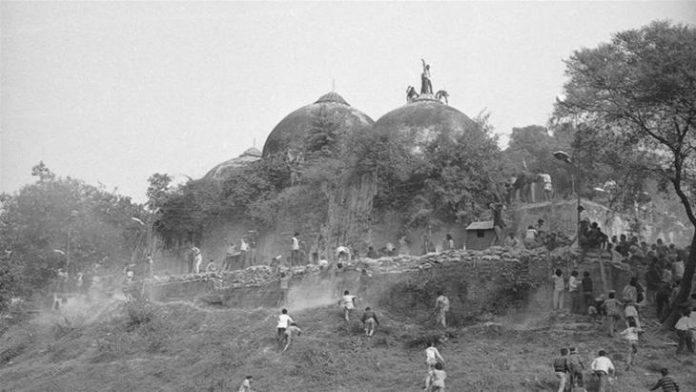 Mujeeb Jaihoon’s unapologetic piece on the spiritual salvation of Indian Muslims in the post-Babri national timeline.

Yet another Black day for the Indian Muslims in their identity struggle. Aug 05 2019 and 2020 will go down in history, like Dec 06 1992, as an unfortunate day when the Founding Fathers of this nation will be turning in their graves. Indian Muslims are an unfortunate lot who voluntarily chose to stay back in this country, even as a large portion of their faith fraternity migrated to the newly founded ‘Holy State’. They took this stand with calculated risks, knowing well they would forever remain an endangered minority in every sense of the word- political, religious and cultural.

As law-abiding citizens of the much celebrated largest democracy in the world, Indian Muslims have time and again bore the brunt of majoritarian politics. The Secular and Left Wing spectrum have repeatedly taken them for rides, well aware of the Community’s fear of the Right Wing. Loyalty of Muslims have been rewarded with institutional insult and indifference at best, and betrayal at worst.

DESPITE UPON DESPITE VERDICT

The Nov 09 2019 verdict of the honorable Supreme Court regarding the disputed land – claimed by Hindus as the birthplace of Lord Ram and by Muslims as site of Babri masjid built in Mughal times – was a complete shock to many level-headed minds. Despite acknowledging that there is no evidence a temple pre-existed the mosque and therefore no temple was destroyed for the mosque construction, despite admitting that demolition of the Babri masjid was a criminal act, despite accepting that act of placing an idol in the Babri Masjid in 1949 as an ‘act of desecration’ – the verdict was pronounced in favor of the Other to pacify majoritarian aspirations. That’s like declaring the runner-up as the champion, not the actual winner, to respect the sentiment of the spectators.

There is little historical or legal proof that any temple was actually demolished to construct a mosque. That remains a controversy. But it is modern history that the mosque was razed in broad daylight- under the nose of the police and army, in the watchful eyes of the media and under the inaction of the administration.

EVICT US. INSULT US. BUT CAN’T ERASE US

True, every Indian Muslim is hurt and wounded by the chest-thumbing rumble of the supremacist Sangh brigade. Their patriotism has received yet another blow from this hitherto tolerant and inclusive nation. But this is not the end of the Indian Muslim project.

Every Muslim problem is ultimately their spiritual problem. A Muslim can be Muslim, only if he or she firmly believes that the God they worship aligns with the weak and oppressed, not the egoistic elite nor the repressive regime. No doubt, Muslims have been unjustly wronged, like in the past, on this black day as the leader of the country inaugurated this ‘funeral’ of Indian Secularism. The patience and restraint of Indian Muslims are well documented. Muslims have lived and prospered in India long before 1528, when the Babri Masjid was built. Their timeline continued unaffected even after Dec 06 1992 when the structure was demolished by the karsevak mob with the blessing of the Establishment. And now with the Bhumipujan ceremony, they may be hurt, insulted and wounded, but not non-existent. Day in and day out, many have been killed in mob lynching and communal riots. The majoritarian regime may be racing to evict and erase the Muslim identity from history and national identity. But the Muslim will remain an integral part of India’s legacy- past, present and future.

The modernist Ataturk Inc. converted many mosques to bars and museums, banned beards, caps and hijabs; jailed the Ulama and shut down madrassas. But tables turned within a few decades. Modern Turkey is the perfect example of the anti-climax for Islamophobic ambitions. The Hindutva-dominated Indian regime hasn’t even come close as Ataturk did.

There is no nothing shameful or embarrassing to Muslims for the construction of a temple in honor of the Ram, an important legend in the Indian traditions, symbolic of justice, forgiveness and dignity- values which are central to a Muslim’s spiritual salvation.

In the words of GANDHI, the father of Nation murdered by a Hindu fanatic: By Ramarajya I do not mean Hindu Raj. I mean by Ramarajya Divine Raj, the Kingdom of God… I acknowledge no other God but the one God of truth and righteousness. Whether Rama of my imagination ever lived or not on this earth, the ancient ideal of Ramarajya is undoubtedly one of true democracy in which the meanest citizen could be sure of swift justice without an elaborate and costly procedure. Even the dog is described by the poet to have received justice under Ramarajya.’

As a practicing Muslim, I unapologetically believe that Ramarajya, as envisioned by Gandhiji, will only entitle my Muslim countrymen to greater peace, equality and freedom. Nevertheless, Patience will be indispensable, like those of Turkish men and women during Ataturk times, in this mission to overcome the momentary existentialist challenges. God-willing.

Mujeeb Jaihoon is an Indian-born author and activist based in the UAE. Jaihoon is also a regular speaker on issues pertaining to education and women empowerment, besides being a vocal critic of wars and injustice. He has authored nine books including Slogans of the Sage and The Cool Breeze From Hind. His blog can be reached on http://www.jaihoon.com