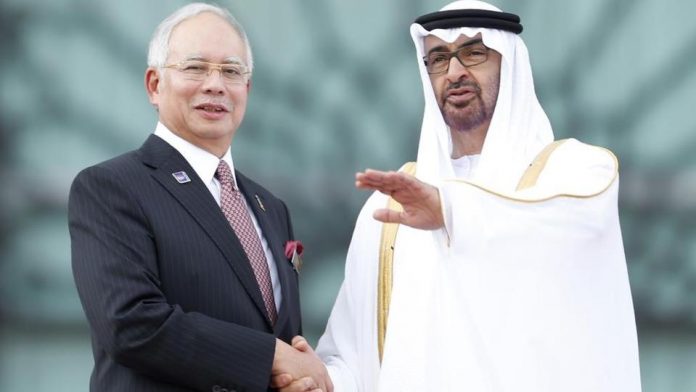 The MACC released audio recordings, revealing that the UAE crown prince faked evidence to cover up the corruption scandal linked to disgraced Razak.

Called the “Heist of the Century”, it is a $4.5 billion financial embezzlement that involves a Van Gogh painting, luxury yachts, banks in the US, Singapore and Switzerland, the Emirati Prince and Leonardo DiCaprio.

The clips mark a massive blow to Nijab, who denies all allegations, and also prove the international extent of the massive scandal, including the UAE ‘s involvement.

MACC chief Latheefa Koya confirmed during a press conference that nine audio recordings indicating fraud have been discovered. Koya called them authentic, saying that besides Najib, the UAE’s de-facto leader and Crown Prince of Abu Dhabi Sheikh Mohammed bin Zayed, was on the calls as well as multiple Malaysian and Emirati officials.

The clips consist of phone conversations from 2016 and linked to the looting of state investment fund, 1Malaysia Development Berhad (1MDB).

In one particular recording, Najib asked the crown prince to help fabricate a loan agreement to show that Najib’s stepson, Riza Aziz, had received financing from the UAE’s International Petroleum Investment Company (IPIC) and not from money siphoned from 1MDB.

Malaysian and US authorities say a whopping sum of $4.5 billion was misappropriated from 1MDB, co-funded by Najib in 2009.

According to the audio clip, Najib purportedly tells Prince Zayed: “I also have this personal request, your highness, that relates to Riza, my son and his movie… if there can be a loan agreement signed to show that it is a legitimate financing package, it’s not money laundering.

“I need that agreement to be sorted out quickly, your highness, that’s my special request,” said Najib.

Prince Zayed agrees to fake the evidence, saying: “Mr prime minister, believe me, I want to finish this, this is bad.”

This is not the first time that the UAE is accused of money laundering.

Dubai, one of the seven emirates that make up the Gulf kingdom, has become a safe haven for money laundering.

The 2018 Transparency International report says: “Dubai has become an active global hub for money laundering … where the corrupt and other criminals can go to buy luxurious property with no restrictions.”

The report, published by the Center for Advanced Defense Studies (C4ADS) in 2018, also identified 44 properties worth about $28.2m that are held directly by US and EU sanctioned individuals, and a further 37 properties worth almost $80m that were owned by members of those illegal networks.

Additionally, the report identifies Amhaz Network, a group connected to the armed wing of Lebanon’s Hezbollah, as owning 13 properties worth about $70m, including a part of Burj Khalifa.

“The transformation of Dubai’s property market into a haven for illicit capital has far-reaching implications for global stability and security, enabling and facilitating global purveyors of corruption, crime, extremism, and terror,” the report says.Source: TRTWorld and agencies