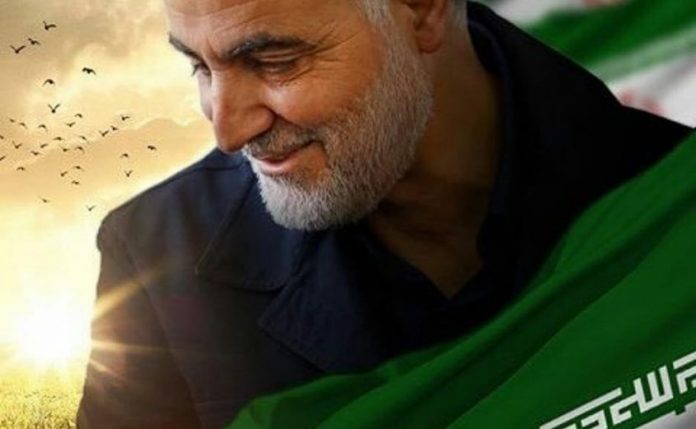 SHAFAQNA | By Leila Yazdani, Nasibeh Yazdani : Senior Commander of the IRGC’s Quds Forces Major General Qasim Soleimani, who was martyred Friday (Jan 3) in a US strike, was one of the most popular figures in Iran. He was the key architect of Iran’s regional influence, leading the fight against terrorist forces. Gen. Soleimani widely represented as a figure of national resistance in the face of four decades of US illegal pressures against Iran.

He joined the Revolutionary Guard (IRGC) in 1979 following the Iranian Revolution. On 22 September 1980, when Saddam Hussein launched an invasion of Iran, setting off the Iran–Iraq War (1980–1988), Soleimani joined the battlefield serving as the leader of a military company, consisting of men from Kerman whom he personally assembled and trained. He quickly earned a reputation for bravery, and rose through the ranks because of his role in the successful operations in retaking the lands Iraq had occupied, eventually becoming the commander of the 41st Sarallah Division while still in his 20s, participating in most major operations.

Soleimani served throughout the war in almost every part of the front, from the retaking of Bostan in December 1981 to the invasion of Iraqi Kurdistan in 1987, during which Saddam’s forces attacked his unit with chemical weapons. After the war, during the 1990s, Soleimani was an IRGC commander in Kerman Province, his military experience helped him earn a reputation as a successful fighter against drug trafficking. Within three years, forces under Soleimani’s command had pacified the province, earning him the lasting gratitude of its residents.

In August 1998, a few months into Soleimani’s tenure as the Head of the Quds Force, Taliban forces swept into the northern Afghan city of Mazar-i Sharif, home to a substantial community of ethnic Hazaras—Farsi-speaking Shia Muslims, according to ctc. The Taliban initiated a brutal pogrom against members of the minority, trashing homes, raping women and girls, and massacring hundreds of Shia men and boys. Among the dead was a group of nine Iranians: eight diplomats and a journalist. Reportedly, it was Soleimani who stepped in and defused the situation without resorting to further violence. On 24 January 2011, Soleimani was promoted to Major General by Supreme Leader Ali Khamenei.

Soleimani played a pivotal role in security of the region

The Major General is widely seen as a strategist in the counter-terrorism operations against Takfiri terrorists in Syria and Iraq. His successful record on counter-terrorism in the region which have led to defeat of the organized terrorism of Daesh (ISIS) is an obvious sign of efforts to establish global security, peace and stability and its willingness to incline towards the world free from aggression and terrorism.

On Nov 21, 2017, following the historic victory of Iraq and Syria’s resistance movement over the sedition of Takfiri terrorism and the end of ISIS’s domination, which was manifested by lowering the flag of this American-Zionist group at Abu Kamal–the last key area in the hands of ISIS–General Soleimani issued an important message to Ayatollah Khamenei: “Today, the Islamic State no longer holds any meaningful territory in Iraq”.

The United States designated the Revolutionary Guards a foreign terrorist organization in 2019, part of a campaign of maximum pressure to force Iran to negotiate on its ballistic missile program and nuclear policy, Reuters told. But, Soleimani had a pointed reply: any negotiation with the US would be “complete surrender.”

Despite its ongoing economic woes, today’s Iran has fashioned itself into one of the premier military and diplomatic powers in the Middle East. It has achieved this with a mix of policies. One man is recognized as the principal architect of each of these policies: Major General Qasem Soleimani, long-time chief of the Quds Force.

Soleimani’s growing authority within Iran’s military establishment was apparent in 2019 when the Leader of the Revolution awarded him the Order of Zolfiqar medal, Iran’s highest military honor. It was the first time any commander had received the medal since the Islamic Republic was established in 1979.

In his article in Foreign Policy, Stanley McChrystal, US retired General and former head of the US military’s Joint Special Operations Command (JSOC) writes about him “Soleimani’s brilliance, effectiveness, and commitment to his country have been revered by his allies.”

The article added “he has helped guide Iranian foreign policy for decades—and there is no denying his successes on the battlefield. He is a calculating and practical strategist”. “Soleimani’s shrewd pragmatism has transformed the unit into a major influencer in intelligence, financial, and political spheres beyond Iran’s borders”, Foreign Policy reported.

Soleimani got what he wants

He is said to have a calm presence, and when he speaks, he does so politely and simply in a pillow-soft tenor, rarely raising his voice. Indeed, he typically tended toward self-effacement. In meetings with everyone from local warlords to Authorities to the Russian foreign minister, Major General Soleimani preferred to sit quietly in a corner. Soleimani is a great listener. He did not impose himself. But he always got what he wants.

He deprecated all attempts at hero worship, refusing, for example, to allow admirers to kiss his hand. “Soleimani is … not a man working in an office. He goes to the front to inspect the troops and see the fighting,” a former senior Iraqi official, who asked not to be identified, said in an interview in 2014. The 2016 movie Bodyguard, directed by Ebrahim Hatamikia, was inspired by Soleimani’s activities. The 2016 Persian book Noble Comrades 17: Hajj Qassem, written by Ali Akbari Mozdabadi, contains memoirs of Qasim Soleimani.