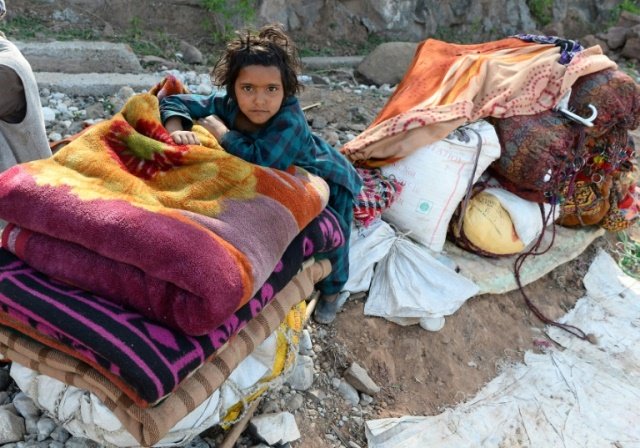 Last month, Mohammad Ashraf received a notice from the local forest department office saying he and his six elder brothers are living on forest land illegally. The notice, Ashraf said, told them they had 10 days to respond, failing which their eviction process will begin.

The family – belonging to the Bakarwal nomadic Muslim community – has been living in Sitni, a small hamlet on the banks of river Tawi, on the outskirts of southern Jammu city since the time of their grandfather, Fakeer Mohammad, who died in early 1960.

Bakarwals – a nomadic sub-tribe moving from place to place seasonally in mountainous pastures of the Himalayas along with their herds of goats, sheep and horses – are part of the larger tribal community of the region. According to the 2011 government census, they make up approximately 12 percent of the 12 million population of the disputed region, claimed by both India and Pakistan.

“It was a dense Jungle when my grandfather and my father first decided to make a one-room mud house here,” Ashraf, 41, told Al Jazeera. “While my father would go for herding goats in the mountains, my old grandfather used to stay here.”

Like Ashraf’s family, over the years the Bakarwals started looking for some sort of stability in life.

“As our father grew old and we started taking care of our cattle, we also decided to have a permanent address and built a house here in this village,” said Akhtar Hussain, Ashraf’s older brother.

“The family swelled and we built three more single-story houses by 1980, and by now only a few members of the family would go with the cattle during our move to mountains for summers,” said Hussain.
Even today, the livelihood of this extended family consisting of 11 households (90 members) on the land of less than one hectare (2.5 acres) is mainly dependent on cattle herding. But now, only a few people go to the mountains with the herds. The community has slowly adapted to a modern lifestyle. They live in houses, their kids go to school and some elders have even started looking for other options to make living.

“We are changing with time,” said Ashraf. “No one among my brothers has been to school but all our children are pursuing formal education now.” The family lives a moderate life.

Their main source of the income comes from rearing about a thousand goats, though some younger people have also started doing other daily wage jobs in the city.

However, over the past month, a number of people belonging to the tribal community have been receiving notices from the authorities classifying their structures, permanent or mud houses, as an illegal occupation in the forest land. In some instances, the authorities have even demolished some houses.

Politicians and activists in the region consider these acts to be part of the Hindu nationalist Bharatiya Janata Party (BJP) government’s project to dispossess people of their land and property in order to change the demographic status of the Muslim-majority region.

Last week, two grainy videos went viral on social media showing officials demolishing the thatched huts while its residents stand witness haplessly. The videos triggered a sharp reaction from the public who feared this was just a glimpse of the future.

The former chief minister of the region, Mehbooba Mufti, who had formed a government in alliance with the BJP, said the eviction is “part of [an] illegal process” which started with the stripping of the region’s special status last August by the government of Prime Minister Narendra Modi.

But officials say they are following court orders. In July 2019, Jammu and Kashmir High Court directed the government to remove encroachments of forest land. The region’s forest department had stated in the court that 64,000 people have illegally occupied 17,704 hectares (43,749 acres) of forest land.

However, the activists say the way authorities are sending eviction notices selectively to the people of the Gujjar-Bakarwal tribal community could mean thousands of people will be rendered homeless.

Muslims being targeted
“It was jungle all over when we started living here,” said Ashraf. “Today, big buildings have come up around us but no one is asking them anything. Only we are being told to leave this place.”

Ashraf and his family members feel they are being targeted because they are Muslim.

“We are underprivileged, economically poor and Muslims. That is why this is happening to us,” said Ashraf, agitated but helpless.
A spokesperson from the governing BJP, Abhinav Sharma, rejected these allegations saying the eviction orders are being served based on the directions of the court.

“The notices are going to all the encroachers irrespective of their religion,” Sharma told Al Jazeera.

The timing of these eviction notices further add to the concerns as they are being issued barely a month after New Delhi enacted a series of new laws – and amended some – allowing Indians to buy land in the disputed region.

Before August 2019, the special constitutional status offered Jammu and Kashmir, as Indian-administered Kashmir is officially called, protection from “demographic flooding” and some degree of political autonomy.

“We have been living here for the last 70 years. No one ever told us that we are here illegally,” said Fareed Ahmed, brother of Ashraf. “Then why did the government provide us electricity and other civic facilities?” he asked.

The traditional forest dwellers are protected in India under the Forest Rights Act (FRI) against forced displacements and have rights of grazing and, apart from timber, they have access to forest resources.

However, this law was not applicable in Indian-administer Kashmir until its semi-autonomous status was revoked last year. Fourteen months have passed since article 370, which gave special status to the region, was revoked but the forest law is yet to be implemented on the ground.

“It is unconstitutional and illegal to remove these people,” said Mohd Zulkarnain Chowdhary, a community activist who practises law in Jammu city court. “They are part of the forests and cannot be displaced. In other parts of the world, the government is making housing colonies for the homeless and here the authorities are making people homeless by this act,” he told Al Jazeera.

The public pressure seems to be working. On Wednesday, the authorities in the region led by the chief secretary, BVR Subrahmanyam, held a meeting to review the implementation of the FRI. Authorities in Kashmir on Thursday announced they will implement the forest law to grant land rights to forest-dwelling communities.

However, the notices of eviction have not stopped.

“More and more people from our community are receiving the eviction notices,” said Talib Hussain, a tribal rights activist.

For Ashraf and his family, this is a cruel joke with them.

“We are living in forests for hundreds of years and now we are being termed as illegal occupants and encroachers,” said Ashraf, breathless and emotional. He hopes authorities never come to demolish their homes or evict them.

“We will prefer death to leaving our homes,” said Ashraf.