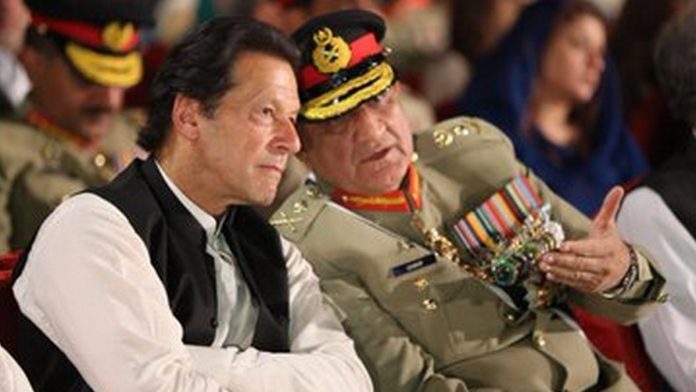 As India tries to sort out its tension with China, Pakistan’s relative silence is noticeable. Although intently watching the India-China conflict, Islamabad’s contribution has not extended beyond the ceasefire violations to some significant ratcheting up the temperature at the Line of Control. If anything, there is the concern that New Delhi may initiate some form of fighting to assuage any domestic concerns regarding the Narendra Modi government’s inability to strongly stand up to China. While responding to Beijing in Ladakh or other places where China has critical interests may take longer for India, the domestic embarrassment could be minimised by increasing temperature with Pakistan. The idea of India starting a limited conflict with Pakistan instead is presented in two articles published within a week of each other from sources that have the ears of the military establishment. This in itself indicates how the military either sees the situation or would like the people to understand it.

Many in the Indian media say that some grand conspiracy is afoot between China and Pakistan in which the latter has amassed about 20,000 troops in Gilgit-Baltistan and is frantically consulting with Chinese generals. Besides some in the Indian media, such a story is close to the heart of Pakistan’s retired Lt General Asad Durrani.

In a recent article, the former Inter-Services Intelligence (ISI) chief talked about a combined China-Pakistan effort against India with the hope to solve the Kashmir issue. However, the article expressed a wish that the two countries should have collaborated before the launch of the crisis in Ladakh. But the fact of the matter is that there is no indication of any extraordinary movement by Pakistan at the Line of Control (LoC) or the northern areas. Of course, there are troops in Gilgit-Baltistan in anticipation of any possible tension and to organise elections next month in August, in which the army will play its role of ensuring its favourite candidate wins, but not the kind of numbers that intelligence reports published in the Indian media present. In fact, given the tension in the area, it would be odd for Pakistan not to ramp up its security, but an aggressive intent is not visible.

What’s in it for Pakistan

Surely, there is a general excitement in Pakistan on the demonstration of the Modi government’s relative weakness vis-à-vis China. From the late 1990s, when Beijing-New Delhi relations had picked up to a degree that it had become a matter of concern for Islamabad, bilateral relations between Pakistan’s two big neighbours have nose-dived in an unprecedented manner. I remember my conversations with some Pakistani diplomats in 1998-99, who were worried about China no longer wanting to play a zero-sum game in South Asia.

Beijing had remained neutral even during Kargil when it encouraged Islamabad to withdraw its troops. When I spoke with him a few years ago, then air force chief, Air Marshal Pervaiz Mehdi Qureshi, talked about his visit to Beijingwith the official delegation headed by Prime Minister Nawaz Sharif with the expectation that the People’s Liberation Army (PLA) Air Force will lend material help as it did during the 1960s. However, he returned disappointed when the PLA Air Force chief told Qureshi that he was ready to help if the Chinese political leadership agreed to it.

Unless China and India find a way around their mutual anxieties about each other’s intent, a new strategic scene has been set after Ladakh from which it is difficult for both to get out while keeping semblance of their respective strength. For Pakistan, this conflict is a strategic balancer that has greater potential of keeping New Delhi engaged, especially if India and China are tempted away from finding a solution to their ongoing tension towards a ‘Siachinisation’ of the Line of Actual Control (LAC). Asserting power and indicating intent to protect territories where ‘even grass doesn’t grow’ by both China and India (or as in the case of Pakistan and India in Siachen) is likely to escalate operational military expenditure and human cost on both sides. This is a battle that Rawalpindi would let China fight itself, and in which it may keep adding to the temperature in relatively small proportions.

Surprisingly, there seems to be a dearth of analysis on the ongoing India-China conflict. Barring some carefully expressed views, there is nothing much to go on. This is probably due to the shrinking of the strategic community. Despite the military’s interest in promoting and building a security studies community, a debate is missing because the general curbing of alternative voices has reduced the organic nature of the conversation. However, the relative silence can be equally attributed to analysts being overly engaged with Pakistan’s domestic political crisis.

Some of the sources I spoke with were of the view that even the military’s attention is diverted to the bigger question of how to deal with the economic and general political crisis generated by Prime Minister Imran Khan and his ministers. The damage that the government and its aviation minister single-handedly brought to the country’s aviation industry is a real crisis that has not only resulted in the European Union Aviation Safety Agency (EASA) blocking Pakistan’s national carrier from flying to Europe but will also have long-term repercussions for the country. Clearly, the hybrid-military/democratic model is failing and Army Chief Qamar Javed Bajwa and his cabal are unable to find a quick and credible replacement for Imran Khan. Even if an internal change within the Pakistan Tehreek-e-Insaf (PTI) is brought, it will be short-term with little likelihood of eradicating issues of governance.

Islamabad is no Kathmandu

The military’s political engagement at a time when temperature in the region is boiling is also a reminder of the Siachen crisis in the mid-1980s. While both India and Pakistan were busy shopping for high-altitude warfare gear and equipment, New Delhi overtook Pakistan in occupying the glacier as Rawalpindi was too busy with domestic politics. A similar situation prevails now, especially if the concern regarding possible Indian aggression is real. Given the concentration of forces in Ladakh, Pakistan’s main concern is about the security of Skardu in Gilgit-Baltistan, an area that may be on India’s focus, especially after the revocation of Article 370.

It’s not that Pakistan can’t defend itself since, for Islamabad, the takeaway from Pulwama-Balakot is that it has a fair chance of surviving in a limited conflict. However, deploying the military is more of a defensive option. And the offensive option, in the form of a substantial increase in cross-border militancy, continues to have its limitations because of the Financial Action Task Force’s (FATF) growing pressure on Pakistan. Those restrictions have not gone away, which is one of the reasons for General Bajwa’s continued carefulness in not excessively aggravating the situation at the LoC. As a senior journalist that I spoke with argued, “If Bajwa didn’t escalate soon after India’s revocation of Article 370 when there was visible anxiety in the armed forces, then he may not do it now when he is in a more stable position”.

India must look cautiously at its neighbourhood where patronage from China will make things more difficult as is obvious from the case of Nepal. Notwithstanding Pakistan’s security relations with China, it is not becoming another Kathmandu and shouldn’t be treated as one. New Delhi may be anxious about the possibility of a two-front situation, but must also recognise that Islamabad has not entirely tilted towards Beijing for its own needs that are totally unrelated to India. In fact, if anything, Pakistan would like to keep a balance between the big powers and other states strategically important to it. While driven by the desire to demonstrate its strength against China, India must think more cautiously about the behaviour of its neighbourhood. Showing Beijing intent to defend may be important but its equally necessary to keep the regional temperature down.

The author is research associate at SOAS, London and author of Military Inc. Views are personal.