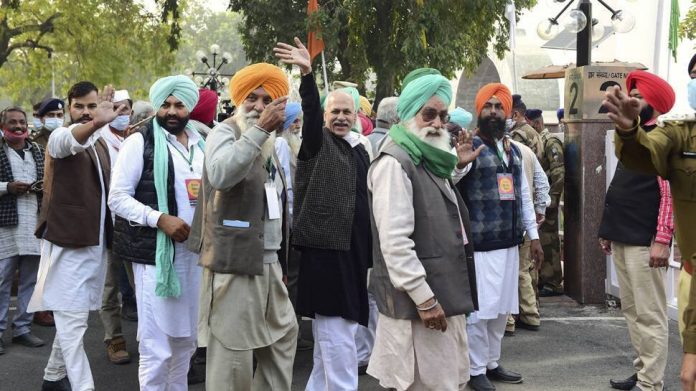 Talks between the Centre and farm union leaders almost collapsed on Friday after the latter conveyed to the government that they would not agree to anything short of a repeal of the three controversial laws. On its part, the Centre hardened its stand saying that the offer to suspend the operation of the three laws for one and half year was the only best deal possible and repealing the laws was out of question.

Agriculture Minister Narendra Singh Tomar appeared sad on Friday after the meeting. He said, it appears that there are some forces which do not want a solution to evolve and are trying to serve their own political interests by prolonging the agitation. No fresh date was set for the next round of talks indicating that the matter is heading towards a dead end.

At Friday’s meeting, the ministers repeatedly requested the farm leaders to reconsider the government’s offer to keep the farm laws on hold, but the latter were adamant. They clearly said that there could be no progress in talks if the laws were not repealed. The government replied that the offer to suspend the laws was the only possible solution, and there was no other offer to be made.

Friday’s meeting was the eleventh one in the series. I remember, at the end of every round of talks till the tenth one, Tomar used to come out with a smiling face to say that he was still hopeful of a breakthrough. But on Friday, after the eleventh round, he looked sad and downcast. He minced no words when he said why the talks failed. He said, ‘this is what happens, when the sanctity of a movement ends and self-seekers start dominating’.

Farm union leaders had already announced on Thursday evening that they were rejecting the government’s offer and the outcome of Friday’s meeting was a foregone conclusion. After the talks failed, most of the farmer leaders also looked unhappy. One of them said, they would meet again on Saturday, but the January 26 tractor rally will definitely take place. One hardliner farm union leader Gurnam Singh Chadhuni said that the meeting was practically over within half an hour, when the ministers told them that the suspension of laws was the only best possible deal and it was up to the farmers to decide. The ministers went away asking farm leaders to discuss among themselves. Chadhuni said, ‘we were unnecessary asked to wait when the talks had ended after half an hour’.

Hannan Mollah, the Left-leaning farmer leader, who used to speak to media after every round of talks, also looked sad. On Friday, his reaction was: “What can we do? There was no breakthrough. We will convey our views to the government by 12 noon tomorrow”.

But the manner in which the farm leaders responded on Thursday and Friday clearly shows that the confrontationists among them had an upper hand. Such a situation occurs when there are multiple leaders heading an agitation. Their response clearly showed that there were many among the farmer leaders who were in favour of keeping the farm laws under suspension because it was going to benefit the farmers in the long run. But there are elements among the farm leaders who want to further their own interests more than those of the farmers. These elements want to browbeat and denigrate the government. These elements are unwilling to accept any middle path and want the agitation to continue. They have been repeatedly announcing that the January 26 tractor rally will take place. Their only motive is to create pressure on the government.

I know there are several among the farm leaders who are not in favour of a tractor rally to spoil Republic Day celebrations, but in the current situation, they cannot ask farmers to stop their rally. Leaders who promise that the tractor rally will be peaceful, do not know themselves that there is no guarantee that the rally may remain under their control, similar to the case where a breakthrough in talks was under control of a single individual.

History has witnessed many mass movements, which were bigger and more violent, but at the end, dialogue was the only way out that provided solutions. My appeal to the farmer leaders is: do not snap off the thread of dialogue, the period of 18 months is not too small, they should accept the government’s offer. There is little possibility of them accepting this suggestion.

Tomar was right when he said there are some forces which do not want a breakthrough. It was evident on Friday, when soon after the talks ended, Punjab chief minister Capt Amarinder Singh made a politically loaded statement from Chandigarh. He announced Rs 5 lakh assistance and a job to one member of the families of those farmers who became ‘martyrs’ during the agitation. The CM alleged that BJP was throttling democracy, the Centre was indifferent to the pleas of farmers, but his government in Punjab will not leave the farmers in lurch.

The people of India have full sympathy towards the families of those farmers who died during the agitation, and the Punjab CM’s announcement of assistance was welcome. But the timing and intent of this statement raise suspicions. Since the beginning of the agitation, Capt. Amarinder Singh was extending full support to the agitators and he wanted the agitation to prolong.

His party leader Rahul Gandhi and his MPs staged protests, went to the President, and gave statements daily in support of the agitation. In between, Rahul took time off to celebrate New Year abroad, came back and watched Jallikattu bull fight in Tamil Naadu, and through Twitter, he daily extended his support to farmers, while deriding Modi. He exhorted the farmers to march ahead like ‘warriors’ and his party working committee passed resolution in support of the agitation.

In the backdrop of all this, one can easily understand to whom was Narendra Singh Tomar referring to as “some forces”, who do not want the farmers to return to their homes. It is now for the farmers sitting on the outskirts of Delhi to decide.