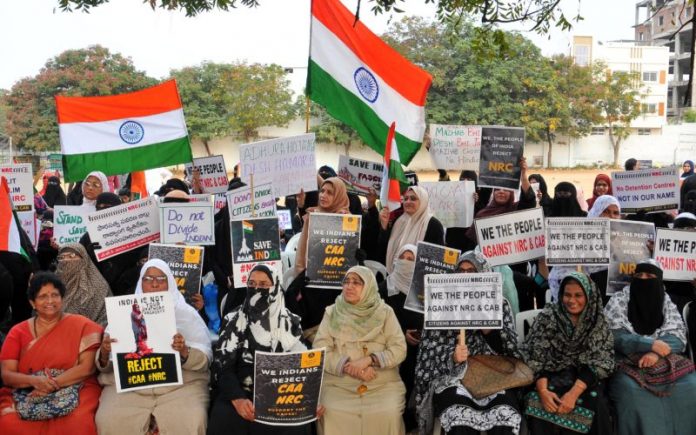 Hyderabad: A large number women in Hyderabad rose above their organisational affiliations to join a protest meeting that was organized by Women Against CAA and NRC at Eidgah Grounds, Mir Alam Talaab, on Friday.

The women were demanding repeal of CAA, scrapping of NRC and doing away with the NPR exercise as all of them individually and collectively raise questions over the constitutionally secular India and its people.

Saba Quadri, one of the activists, told siasat.com that women cutting across religious and organisational affiliations came together to voice their grave concern over CAA, NRC and NPR.  The participants called these laws as “assault on the essence of India.”

“The participant women also passed a resolution in support of 2,000 women who are holding incessant protest dharna near Shaheen Bagh in New Delhi braving dipping temperatures night and day,” she said.

The detention centres that have already been constructed in Assam, Bengaluru and other cities should be immediately scrapped.  This is a free country not a copycat of Nazi Germany, the protestors said.

Among the women who participated in the protest were doctors, engineers, management consultants and representatives of various groups of professionals. Some of those who took part in the protest include Ms Sandhya, Ms Maria, Ms Karishma, Ms Ambika, Ms Rubina and Ms Asma.

These women have also been holding ‘flash protests’ at several places in the city for the last few days.