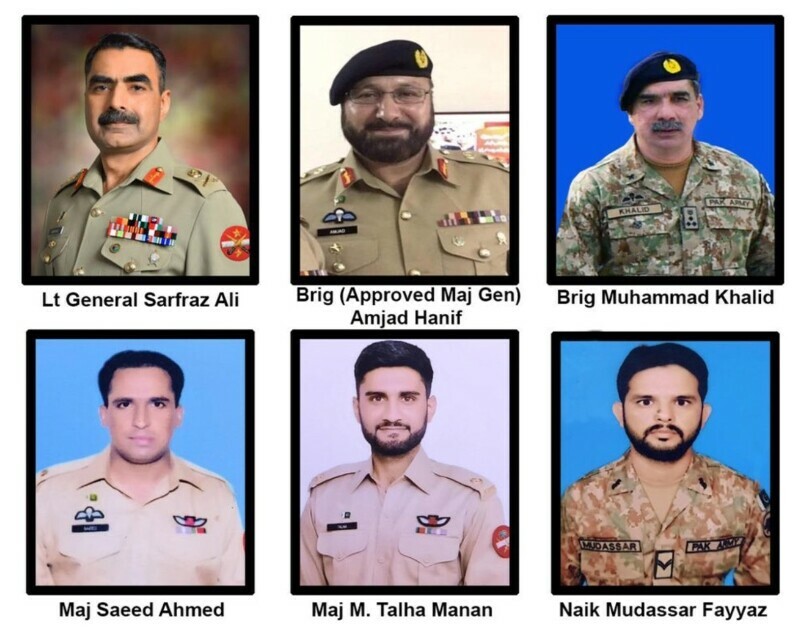 The wreckage of the Pakistan Army helicopter that went missing in Balochistan last night was found near Musa Goth in the Lasbela district, the Inter-Services Public Relations (ISPR) said on Tuesday.

“All 6 officers and soldiers including Lt Gen Sarfraz Ali embraced shahadat,” the media affairs wing of the armed forces tweeted.

It added that the accident occurred due to bad weather, as per initial investigations.

The chopper was on flood relief operations in Lasbela, Balochistan when it lost contact with ATC [air traffic control].

Six individuals were on board including Commander XII Corps Lt Gen Sarfraz Ali, who was supervising flood relief operations in Balochistan.

Police sources had told Dawn that area where the chopper went missing was mountainous terrain, without even jeep paths, making it extremely difficult for search and rescue parties.

“Either you go on foot or motorcycles or conduct aerial surveillance,” a senior official had said.

Rescue operation to recover the wreckage of the army helicopter’s crash in Lasbela on Tuesday. — Photo by Ismail Sasoli
Other difficulties included lack of cell phones coverage and no electricity. Police are said to have engaged the services of local volunteers to assist with the search operation.

Military personnel and equipment, including helicopters, have been engaged in relief operations in the flood-hit districts of Balochistan for weeks now.

President Dr Arif Alvi reached out to the army chief and expressed deep grief over the martyrdom of the army officers and soldiers.

Paying tribute to the officers, he said they were martyred while working with great zeal, hard work, and dedication to “fulfil their duty and serve the nation”.

During the telephonic conversation, Gen Bajwa told Dr Alvi that bad weather and reduced visibility led to the helicopter crash.

Separately, Prime Minister Shehbaz Sharif tweeted that the nation was deeply grieved by the martyrdom of Lt General Sarfraz Ali and 5 other officers of the Pakistan Army.

“They were doing a sacred duty of providing relief to flood affectees,” he said, adding that the nation will remain eternally indebted to the “sons of the soil”.

PTI chairman and ex-premier Imran Khan said that he knew Lt Gen Sarfaraz personally. “I had the privilege of knowing Lt Gen Sarfraz Ali whom I found to be a thorough professional & an upright, honest human being.”

“My condolences and prayers to the families of the martyrs,” he added.

Foreign Minister Bilawal Bhutto Zardari expressed shock over the news of the incident and extended his condolences to the martyrs’ families.

“Every PPP worker and supporter is an equal participant in the grief of the heirs and the Pakistan Army over this tragic accident,” he said.

Meanwhile, Balochistan Chief Minister Mir Abdul Quddus Bizenjo said that the accident was “unbelievable” for him.

“All the people in the helicopter are the asset of the country and the pride of the nation,” he said, expressing that they had laid down their lives while fulfilling their national duty.

He said the martyrs were among the best army officers and their loss was a national tragedy. The chief minister went on to say that he had a brotherly and friendly relationship with General Sarfraz Ali and lauded his work in Balochistan.

“The people of Balochistan salute the martyrs,” he added.

Moreover, PPP co-chairperson and former president Asif Ali Zardari expressed deep grief and sorrow over the accident and prayed for the martyrs.

In a tweet, PML-N Vice President Maryam Nawaz said she was “deeply saddened” by the news and prayed for the high ranks of the martyrs.

Interior Minister Rana Sanaullah said that his heart went out to the families of the martyrs. “May Almighty bless the martyrs with the highest ranks in Jannah and provide the aggrieved families with courage.”

Senate Chairman Sadiq Sanjrani also expressed his grief over the news and prayed for the strength and patience of the martyrs’ families.

Former federal minister Asad Umar recalled his interaction with Lt Gen Faraz saying that he “found him to be not just a fine officer but a good human being”.

“His heartfelt desire to help the people of balochistan is what i remember the most,” the PTI leader added.

“Had seen him work tirelessly in Balochistan when I was in government. All others on board were also busy serving our country on the frontlines like him, keeping up the long and proud tradition of Pakistan army support to relief efforts.”

During the telephonic conversation, PM Shehbaz had expressed his concern over the safety of Lt Gen Sarfraz and other officials onboard the helicopter.

He had termed the senior army officer a “thorough professional and an excellent person”.

The prime minister had also prayed for the safe return of the brave sons of the soil, saying the entire nation was deeply saddened over the incident.

He had said the officers who provided assistance to the flood victims had emerged as an exemplary example of dedication and service.