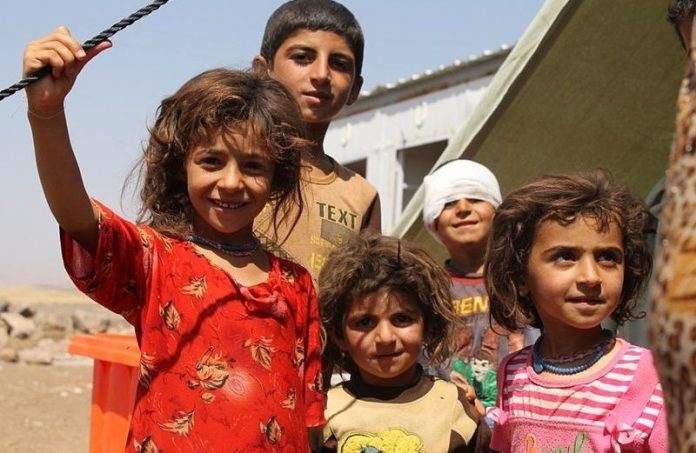 SHAFAQNA- Almost 2,000 Yazidi children freed from captivity by the Islamic State group are facing a physical and mental health crisis, according to Amnesty International.

In a new report based on dozens of interviews in northern Iraq as “Legacy of Terror”, Amnesty International found that 1,992 children who faced torture, forced conscription, rape and other abuses at the hands of ISIS were not getting the care they need.

The 57-page report, also addresses the urgent need to end the enforced separation of women and their children born of sexual violence by ISIS members.

Between 2014 and 2017, ISIS committed war crimes, crimes against humanity, and what the UN describes as genocide against the Yazidi community in Iraq.

“While the nightmare of their past has receded, hardships remain for these children,” Matt Wells, deputy director of Amnesty’s crisis response team said on the report’s release. “After enduring the horrors of war at an extremely young age, they now need urgent support from the national authorities in Iraq and the international community to build their future.”

“Survivors of horrific crimes, these children now face a legacy of terror. Their physical and mental health must be a priority in the years ahead if they are to fully reintegrate into their families and community,” Wells noted.

The Yazidis are an ethno-religious minority which numbered around 550,000 in their heartland of northwest Iraq before ISIS swept through the region in 2014, English Alaraby reported.

Claiming the Yazidis to be heretics, ISIS slaughtered thousands of men, abducted and enslaved women and girls and forced boys to fight on its behalf.

The report singles out former child soldiers and girls subjected to sexual violence as the two categories the most in need of rehabilitation.

Thousands of Yazidi boys captured by ISIS were starved, tortured and forced to fight. As a result, these former child soldiers are especially likely to suffer from serious health conditions or physical disabilities, such as lost arms or legs.

Yazidi boys are often isolated upon their return, as their families and communities struggle to acknowledge their experiences during captivity.

Yazidi children need urgent support to have a better future

Of the 14 former child soldiers interviewed, more than half told Amnesty International they had not received any form of support after their return.

Sahir, a 15-year-old former IS child soldier, told Amnesty that he knew he needed mental support to cope with his trauma but felt he had nowhere to turn.

“What I was looking for is just someone to care about me, some support, to tell me, ‘I am here for you’,” he said.

Girl survivors of sexual violence suffer from a range of serious health conditions, including traumatic fistulas, scarring, and difficulties conceiving or carrying a child to term, the report said.

A doctor providing care for women and girl survivors told Amnesty that almost every girl she had treated aged between nine and 17 had been raped or subjected to other sexual violence.

“I was a child when they made me marry. I want my future to be better. I want ISIS to be held accountable for what they did to me,” said Randa, a 14-year-old who was in ISIS captivity for five years.

“We have all thought about killing ourselves, or tried to do it,” said Hanan, a 24 -year-old Yazidi whose daughter was taken from her.

“These women were enslaved, tortured and subjected to sexual violence. They should not suffer any further punishment,” said Wells

“They need to be reunited with their children, and any future separations must be prevented,” he added.

Several women interviewed by Amnesty International said they were pressured, coerced or even deceived into leaving their children behind, causing severe mental anguish.

Amnesty International is calling for international organizations such as the UNHCR to prioritize and fast-track these women and children for resettlement or humanitarian relocation, with the co-operation of the national authorities and foreign governments.

Yaidi child survivors were deprived of formal schooling during their years in captivity.

Amnesty said access to education could help ease children back into society, but tens of thousands of Yazidis still live in displacement camps where schooling is irregular.

Many Yazidi child survivors have returned speaking Arabic instead of Kurdish, preventing them from reintegrating fully with their families and community. Already impoverished, many families are also in severe debt after having to pay tens of thousands of US dollars as ransom to secure their children’s release.